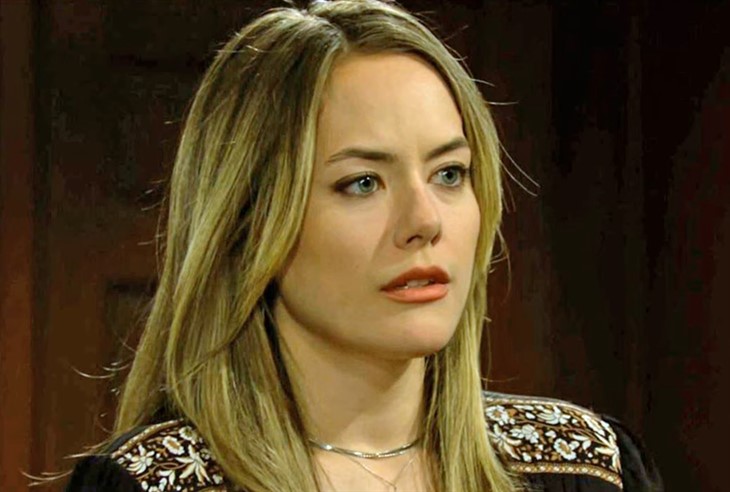 The Bold and the Beautiful (B&B) spoilers document that Hope Spencer (Annika Noelle) sat with her aunts at the Logan mansion. They discussed various topics, including Eric Forrester’s (John McCook) devotion to Quinn Fuller (Rena Sofer).

Katie referred to Eric’s saintly status in forgiving Quinn her latest indiscretion. But Quinn’s more recent cavort with Carter Walton (Lawrence Saint-Victor) is old news. Instead, Donna’s reaction shot to the conversation shielded what has been happening behind Quinn’s back on B&B.

The Bold And The Beautiful Spoilers – Hope Spencer An Intriguing Choice

Hope is teased to be the first person to learn that her aunt and Eric are involved. Noelle’s character will see them in a compromising position, which means Hope will begin carrying that burden.

Neither Donna nor Eric want anyone to know about their romantic reconnection. But having Hope be the first to learn this shocking news could be a blessing in disguise.

Hope is not one to use juicy information to her advantage, except for Steffy Forrester Finnegan (Jacqueline MacInnes Wood) during the Liam Spencer (Scott Clifton) rivalry years. Hope has no beef with her aunt or Eric. Instead, she cares for both of them.

Donna has honestly told Eric that he is her one true love. TPTB teased this couple’s comeback in the recent past when Donna prepared a collage dedicated to Eric.

But it was not until recently that this one-time married couple was revealed to have gotten back together under Quinn’s nose. Donna rationalized Eric’s marriage to her as tolerable as long as they continued clandestine meetings.

However, Eric recently said that his supposed pickleball games, which represent the cover story he is giving to Quinn, have to end. That sparked Donna to tell Eric he should leave his wife.

The Bold And The Beautiful Spoilers – Will Eric Forrester Be Forced To Decide?

It is intriguing to consider how Quinn will react when, likely not if, she learns of Eric’s betrayal. She is not even considering his disloyalty while still harboring guilty thoughts about her bond with Carter.

However it happens, and whether Hope is somehow involved in the reveal or not, Eric appears on a plot path where he will be forced to decide whether to fight for his marriage to Quinn or end it.

Quinn might use what she learns as the impetus to leave Eric and go to Carter. Whether that results in Donna reconciling with her honey bear will be seen on B&B as well.