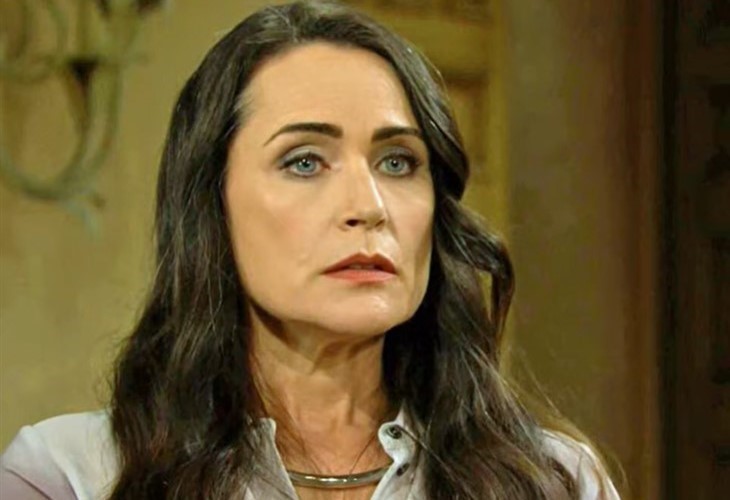 The Bold And The Beautiful spoilers document that Quinn Fuller (Rena Sofer) has no idea that her husband reached out to Donna Logan (Jennifer Gareis) earlier this year. Eric Forrester (John McCook) forgave Quinn’s affair with Carter Walton (Lawrence Saint-Victor) and claimed to want their marriage to remain intact.

But Eric changed his mind, as viewers learned in the recent past. It was not shocking to see him and Donna together, based on what now can be considered teaser scenes with McCook and Gareis’ characters a handful of months ago at Forrester Creations.

Soap fans know what likely happens next. Quinn learns the truth and then reacts.

The Bold And The Beautiful Spoilers: Sheila Learns Finn Is Alive!

It is possible that Eric takes Donna’s recent advice to heart. He could have a serious conversation with Quinn where he reveals his doubts about the viability of their marriage.

While Quinn’s reaction will not be good, Eric will control the narrative if he comes clean to her about his doubts. She would push him in this scenario, with the Donna reveal probably being necessary.

Quinn absolutely believes that Eric has always been loyal to her. That seems to have been true until he became romantically involved with Donna.

Learning that Donna, of all people, is the woman Eric sought for reinforcement of his ego will crush Quinn. She will rightly feel betrayed and then instantly reevaluate her re-dedication to Eric.

The above will establish a justification for turning to Carter for solace. Their connection is genuine, and appears to be equal, with the mutual draw almost certainly resulting in a coupling by that point in the assumed plot.

Carter recently decided that Paris Buckingham (Diamond White) is someone he can learn to love. He likes Paris and appreciates her strong feelings for him.

Paris is someone Carter believes projects as a loving wife and mother. He is lonely and vulnerable, coming off two failed connections.

Fans recall that Paris’ sister, Zoe Buckingham (Kiara Barnes), wronged Carter during their engagement. Grace Buckingham (Cassandra Creech) is off-base in her analysis of that story line and believing that Carter is harassing Paris at FC.

However, Paris’ feelings about her mother’s so-called interference may change if Quinn becomes available to Carter in the near future.

This site is a leading source for everything linked to The Bold And The Beautiful. Check back regularly for B&B spoilers and news!