Days Of Our Lives Spoilers: Gwen And Leo Accuse Each Other Of Doing Away With Abigail 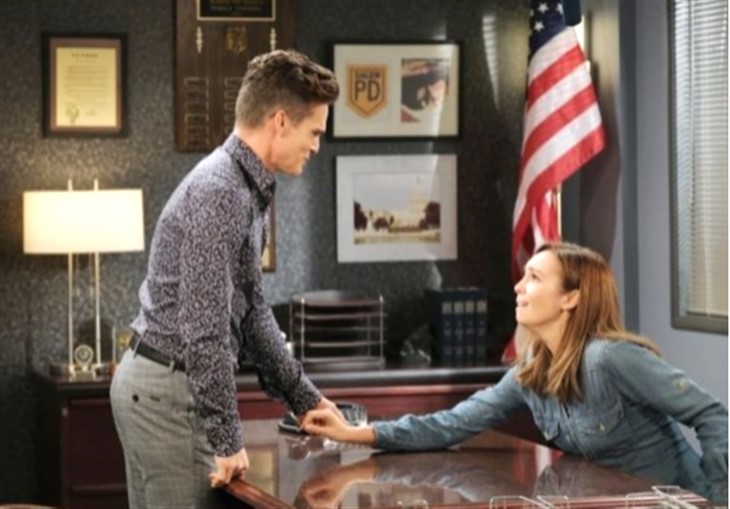 Days of our Lives (DOOL) spoilers and updates tease Gwen Rizczech (Emily O’Brien) had been attempting to take responsibility for her actions. Gwen had committed a number of serious crimes. Gwen decided that she would take the deal that her father Jack Deveraux (Matthew Ashford) got Justin Kiriakis (Wally Kurth) to make for her. Gwen was sent to jail to serve a short sentence. Gwen has been able to turn to her friend Leo Stark (Greg Rikaart) for support. Gwen found that she has had trouble with her sister Abigail Deveraux DiMera (Marci Miller) and has wanted to find a way to get back at her.

Gwen has a complex and troubled past with Abigail. Gwen had seduced Abigail’s husband Chad DiMera (Billy Flynn) and had gotten pregnant. Gwen lost her baby and kept it a secret. Gwen and Abigail fought on the stairs at the DiMera estate and Gwen fell down the stairs. Gwen blamed Abigail for the loss of her child. Gwen and Abigail tried to co-exist when the truth came out but could not find a way to be sisters. Gwen wanted to marry Xander Cook (Paul Telfer). Abigail found out that Gwen knew that Xander’s ex-fiancé Dr. Sarah Horton (Linsey Godfrey) had been kidnapped by Kristen DiMera (Stacy Haiduk). Gwen was desperate to hold on to her relationship and turned to Kristen to kidnap Abigail. Abigail and Sarah were rescued from Kristen.

Days Of Our Lives Spoilers: Why The Soap Murdered Abigail DiMera

Gwen was determined to make sure that Sarah could not take Xander away from her. Sarah had believed that she was Renee DuMonde (Philece Sampler) because of a drug that Dr. Wilhelm Rolf (William Utay) created. Chad was able to get Dr. Rolf to create the antidote for the drug. Gwen switched the antidote for the drug and Sarah got a second dose of the drug. Abigail found out about the crimes that Gwen committed and exposed them at Gwen wedding to Xander. Gwen was arrested and she told Abigail that she had killed her grandmother Laura Horton (Jamie Lyn Bauer). Gwen wanted to talk to Abigail in jail. Gwen wanted to get Abigail to take a gift to Jack for his birthday. Abigail destroyed the gift which infuriated Gwen. Gwen called Leo to tell him that she wanted him to kill Abigail.

Leo had wanted to get back at Abigail because she plotted to take his ex-fiancé Craig Wesley (Kevin Spirtas) away from him. Abigail and Chad had tried to make Craig believe that Leo had cheated on him with Chad. Leo was able to convince Craig that he had not cheated on him with Chad. Leo was going to marry Craig and Chad stopped the wedding. Chad exposed the truth that Leo wanted to marry Craig for his money. Leo has been able to get back at Chad by getting a scandalous article published about Chad. Leo had been trying to decide on what he would do to Abigail. Leo was shocked when Gwen called him to tell him to kill Abigail.

Days of our Lives Leo had gone to Abigail and Chad room at the DiMera estate and hid in the bathroom. Leo had taken a bag with a knife in it with him. Chad left Abigail alone in their room. Did Leo come out of the bathroom and kill Abigail? Gwen was in jail but she was able to make a phone call to someone. Gwen had gone missing in the jail for a short time. Was Gwen able to find a way to get out of jail to kill Abigail? Gwen and Leo had different motives for killing Abigail. Gwen may believe that Leo carried out her orders to kill Gwen. Leo may believe that Gwen found a way to kill Abigail. Will Gwen and Leo turn on each other over the Abigail’s death? Be sure to catch up on everything happening with DOOL right now. Come back here often for Days of Our Lives spoilers, news, and updates.