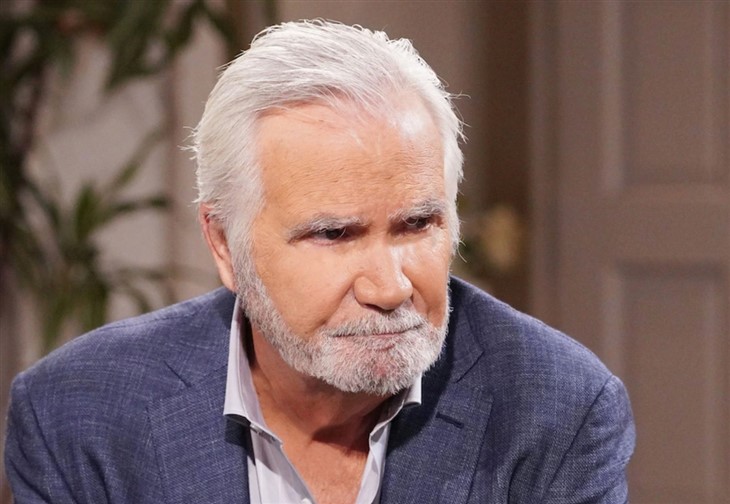 The Bold and the Beautiful spoilers document that Eric Forrester (John McCook) is continuing to meet regularly with Donna Logan (Jennifer Gareis). It feels like they are getting together daily.

Meanwhile, Quinn Fuller (Rena Sofer) is a dutiful wife. She has rededicated herself to Eric, which is quite the turnabout considering past events.

It took a lot for Quinn to evolve into the injured party. But that is what she is on B&B, as the supposed paragon of virtue, Eric, is unrepentantly involved with Donna.

The Bold And The Beautiful Spoilers – Donna Logan In The Right?

Donna is right to have asked Eric why he stays with Quinn. It is obvious at this point, and this many years into their marriage, that their bond is not strong.

Eric was devastated when he learned about his ED diagnosis. Not sharing that news with Quinn the same day, or shortly after he was informed by his doctor, was a mistake. It also represented a major red flag.

McCook’s character distanced himself from Quinn after the diagnosis. Then, when learning of her connection with Carter Walton (Lawrence Saint-Victor), he agreed to allow them to continue. That was crazy, as Carter said.

So, Donna is wrong to enable Eric’s desires while he is still married to Quinn. But her sense that he should not be with Sofer’s alter ego is accurate.

Eric has power, prestige, and money. That is a major reason why Quinn is his wife.

Donna loves Eric for who he is inside. Yes, she is aware of the outward success he has achieved. But her feelings for the man she was married to years ago have not lessened.

Eric’s fantasy world has Quinn in the mansion, indefinitely okay with the cold shoulder he is again giving her. Plus, he has Donna, who is okay with their afternoon meetings.

The Bold And The Beautiful Spoilers – Quinn Fuller Needs The Truth

Quinn needs the full picture of Eric’s daytime delights to make a decision. Does she love him enough to forgive this indiscretion, or will the actual state of their marriage force its end?

Eric is not committed to Quinn. She has developed stronger feelings for Carter. So, as Donna asked, why are Eric and Quinn together?