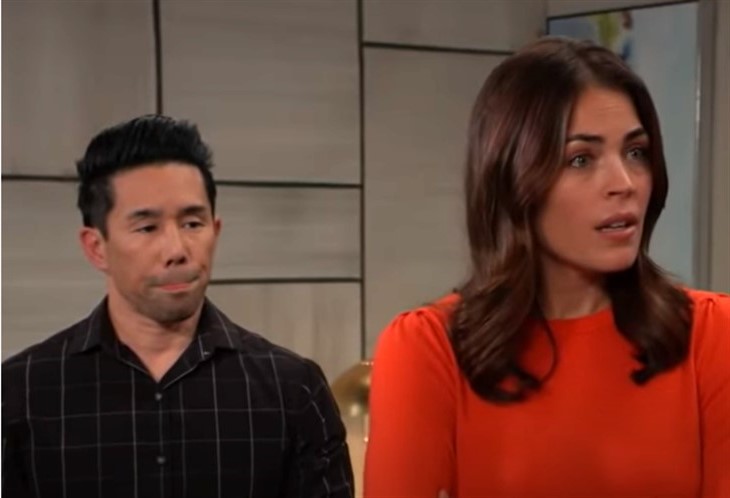 General Hospital spoilers and updates tease that Brad Cooper (Parry Shen) will try to make peace with Britt Westbourne (Kelly Thiebaud) but he won’t be honest, in an upcoming GH episode!

Brad really committed a huge faux pas when he videoed Britt coming out of the pool soaking wet at the Society Setups pool party! One good thing that came out of Cody Bell (Josh Kelly) landing on her is that the cold water of the pool sobered her up very quickly – she’d been plastered! Brad makes a huge fuss over Britt and even comes bearing gifts, since he certainly doesn’t want to lose her friendship; she’s one of the only friends he has!

General Hospital Spoilers: Laura And Martin Are Driven To Solve A Personal Mystery

Brad tries to make peace with Britt but he isn’t honest about everything. At least Brad only made a GIF and didn’t put the whole video online – or did he?

GH Spoilers – Could There Be More Backlash To Come?

Britt started getting backlash from the gif almost as soon as it appeared online – with calls from the hospital board threatening discipline, but she couldn’t understand why over a GIF! She didn’t think she was famous and now it appears that she’s infamous, her mother Liesl Obrecht (Kathleen Gati) saying she was a meme, which was the wrong terminology. It was very embarrassing to be pulled into the pool in a public gathering by Cody’s parachute, but it was not her fault; why is the medical board citing her?! If it were a whole video including of her being drunk and acting out she could understand it! She asked Brad to take down the GIF, which he has done, but he tells her he can’t do anything about people saving it to their devices.

There obviously must be more online than just a simple GIF – Scott Baldwin (Kin Shriner) tells her a GIF alone should not have attracted negative attention from the hospital board. Liesl disagrees, but she has been in Chief of Staff positions and one’s reputation is very important; she hopes that they don’t dig too hard into Britt’s past. Britt had been sanctioned for her past criminal charges before and gotten her medical license back but since the Cyrus Renault (Jeff Kober) scandal they are more worried about public image.

Brad uploaded more than the footage he made the GIF from but has not been able to get it removed from the net! He’s not sure what to do and can only hope Britt never finds out!!

GH Spoilers – Britt Westbourne Is Happy For The Flowers And Dinner

Brad treats Britt to flowers and dinner, like he was taking a woman on a date; however he’s very nervous that the truth could come out and how he’d explain! Brad has learned to hide his emotions and timidity much better since working the poker games for his aunt Selina Wu (Lydia Look). The only saving grace is that the whole video where she was drunk and making loud proclamations right before the splash in the pool was uploaded under a screen name! He’s never shared any of his own You View videos with her so she would have no idea who did the whole video!