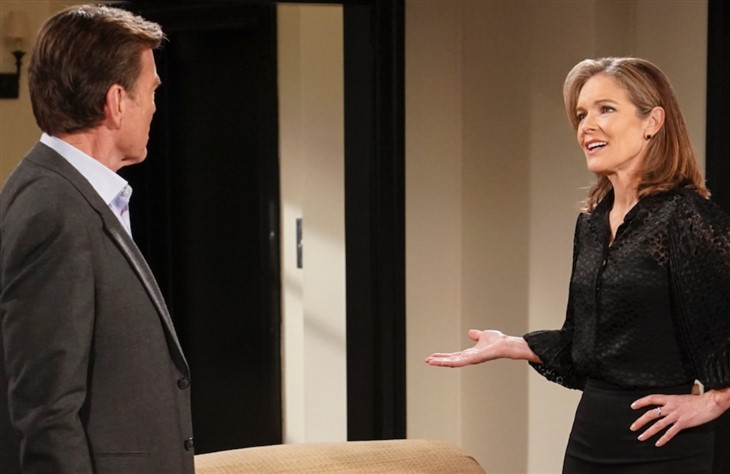 The Young and the Restless spoilers document that Jack Abbott (Peter Bergman) had a nice chat at Society the other day. But Diane Jenkins (Susan Walters) committed so many misdeeds and, of course, faked her murder that Jack is super sensitive about nearly anything she says.

Diane’s off-handed comment about Phyllis Summers (Michelle Stafford) was too much for Jack. He blew up before being talked back down by Diane.

However, Jack’s next unexpected meeting with Diane did not result in the type of progress she was hoping for. Rather than accept her offer that they have dinner after her spa treatment at the Grand Phoenix, Jack gave her a flat no.

The Young And The Restless Spoilers: Ashley And Traci Abbott Take A Walk Down Memory Lane

Jack and Diane was a popular song in 1982. That is when Alex Donnelley (Diane) became the first actor to portray this character.

Donnelley was followed by Walters in 2001. Walters remained with the cast until 2010, when Maura West (Diane) assumed the role that appeared to end.

While Diane’s only child is Jack’s, she never married him. Her only other spouse was Victor Newman (Eric Braeden).

Victor was married to Diane in the late 1990s and again in the early 2010s. Neither union produced lasting feelings of respect.

Devoted fans recall Victor’s fabled Newman Ranch setting. The reference is to his original home that was burned down by Sharon Rosales (Sharon Case), which was not her last name at the time.

Victor and Diane lived in the Newman Towers penthouse during the period when he was not married to Nikki Newman (Melody Thomas Scott). Flashback scenes refreshed the minds of devoted fans and may have caused newer fans to wonder where Victor and Diane (as then played by Walters) were located.

Kyle Abbott (Michael Mealor) was named after Diane’s father, Kyle Jenkins (no actor ever cast for this role). She assumed Kyle was the tie that would bind her to Jack forever.

The Young and the Restless Spoilers: Ashley And Traci Reminisce About The Good Years #YR #YoungandRestlesshttps://t.co/gLIAtZEPSh

While that has proven true, his existence never led to anything more than romance between Diane and Jack. He retains no interest in Diane decades after their son was born and following her incredible return from the assumed great beyond.

But all is possible in Genoa City, Wisconsin. Jack is vulnerable, especially if he and Phyllis do not make up. And Diane, as always, remains optimistic on Y&R.