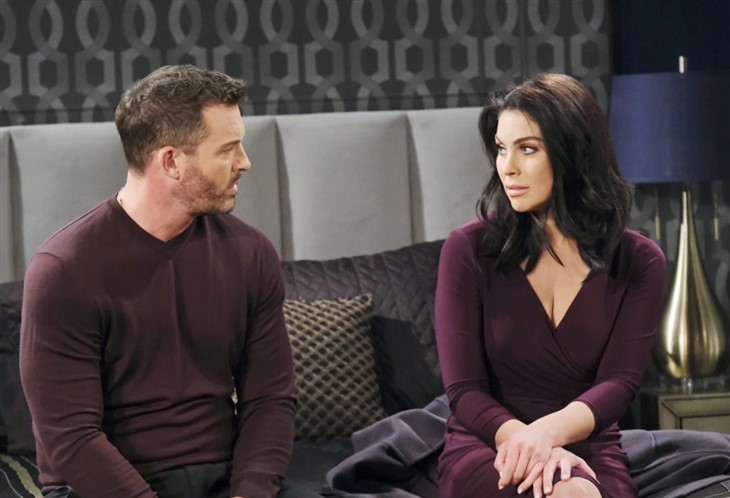 Days of Our Lives spoilers and updates tease that Leo Stark (Greg Rikaart) will have a tense encounter with Chloe Lane (Nadia Bjorlin) and Brady Black (Eric Martsolf)! Leo’s trying to skip town and he’ll run into the pair in an upcoming DOOL episode!

By now, the news of Abigail DiMera’s (Marci Miller) has spread all over Salem and there are likely rewards out for any information that leads to the killer! Leo, however will never tell what he may know because he knows that he might be a prime suspect; Abigail was key to stopping his wedding! She and Chad DiMera (Billy Flynn) plus Sonny Kiriakis (Zach Tinker) were high on his revenge list and Abigail was next!

Leo was there when Abigail was murdered; he broke into her jewelry box and stole money and jewelry. He had been going to stab her with a steak knife but he could have chickened out and then someone else did it for him-who he saw!

Leo knows he must make his exit quickly before the police can catch up to him; he has his bag with the money and jewels, although the knife is missing. Even though he may not have been the one to stab her, he had to get rid of the knife. Leo is trying to get transportation arranged as soon as possible before it’s too late to skip town; as far as the rest on his revenge list, he’s given that up! He doesn’t have time to exact any more revenge on any more targets, besides that would make him look even more guilty of the murder! He decides to use the cash to get a flight out of town from the Salem airport.

Before he can make his hasty exit, Leo runs into his next two would-be victims; Chloe and Brady! They were the ones who tried long and hard to get her father, and the love of Leo’s life Craig Wesley (Kevin Spirtas) to break up with him! They had tried every trick in the book to get Craig to dump him and finally they, Chad and Abigail, along with Sonny, succeeded!

Of course Leo wants revenge on Chloe and Brady, but it would have to wait. Leo has to get out of Salem and far, far away before he’s arrested on suspicion of murdering Abigail!

Chloe and Brady literally stand in Leo’s way as he tries to get to the airport with his duffel bag, and they have him trapped! Brady has him in a stranglehold as Chloe calls the police, and as far as they’re concerned, Leo’s culpability as Abigail’s murder is a foregone conclusion! Brady loudly confronts him for killing her and proclaims he’s going down for good, as Leo squirms and protests, saying he’s innocent, and tries to kick the duffel bag away. Brady and Chloe are making sure that he never hurts anyone in Salem again, and Leo will be left holding the bag!