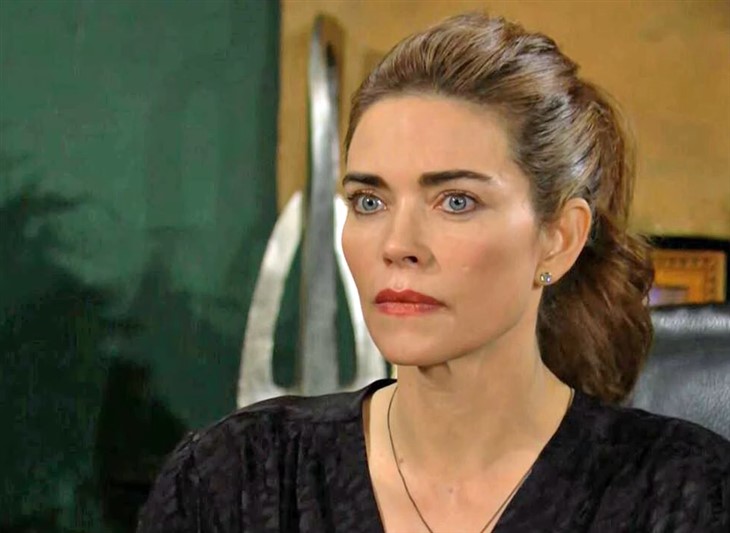 Once she breaks ties with the Newmans, Victoria and Ashland Locke (Robert Newman) hole up in a Manhattan hotel suite to regroup and figure out where they’ll go from there. Victoria knows the only way the two of them can be together alone is out of town, not telling anyone back in Genoa City of their plans. If they hadn’t, her family would have been after them en masse to stop them in their tracks and separate them; Victoria wouldn’t put it past her father to kidnap her!

She knows that Victor Newman (Eric Braeden) would stop at nothing to break her and Ashland up, and Ashland agrees! Running away and holing up in the Manhattan hotel suite, likely under assumed names, was the only way to move on with their lives.

However, breaking ties with her family doesn’t mean she doesn’t want to know what is going on with them, and she keeps up with all the latest developments online. Victoria isn’t surprised nor is she in the least bit concerned when she sees that Adam Newman (Mark Grossman) has been named as her successor at Newman Enterprises. She just figures he’ll end up sabotaging himself with the company and with Victor like he always has in the past anyway, and besides, she has other plans for the future. Back home, Adam gloats that he had this complicated plot to get Victoria out of the company and here she did it for him. However, Adam shouldn’t count his chickens before they’re hatched!

Victoria has an idea that she shares with Ashland, and that is to start their own communications company and wants to both compete with and stick it to the Newmans! Ashland thinks that is an excellent idea; and it’s certainly in his wheelhouse, he didn’t get the reputation that earned him the nickname “Locke Ness Monster” for nothing! He can’t wait to get started on the plotting and planning, and Victoria clarifies she’s using her own business contacts to get this party started.

Victoria’s thinking to lure away all of Newman Enterprises’ top talent to work in her and Ashland’s new company, that way she can effect maximum damage. Ashland agrees totally – a company divided against itself cannot continue to operate.

The Young and the Restless Spoilers: Victoria Newman Is Looking For A Fresh Start – Will Ashland Stay By Her Side? #yr #youngandrestlesshttps://t.co/AZvQHSkxvm

Victoria gives her brother Nick Newman (Joshua Morrow) a call, but it’s with an ulterior motive; she wants to leave some hints to Nick that this move is permanent! She also knows she’s leaving some breadcrumbs for Victor, because Nick will no doubt tell him what’s going on, saying she’s taking business meetings in New York. Victoria wants Victor to know she’s moving on from Newman Enterprises and the Newmans in general, even though she fully expects fallout! But she’s as good a “chess player” as her father when it comes to the corporate world, and she’s already ten moves ahead of him!