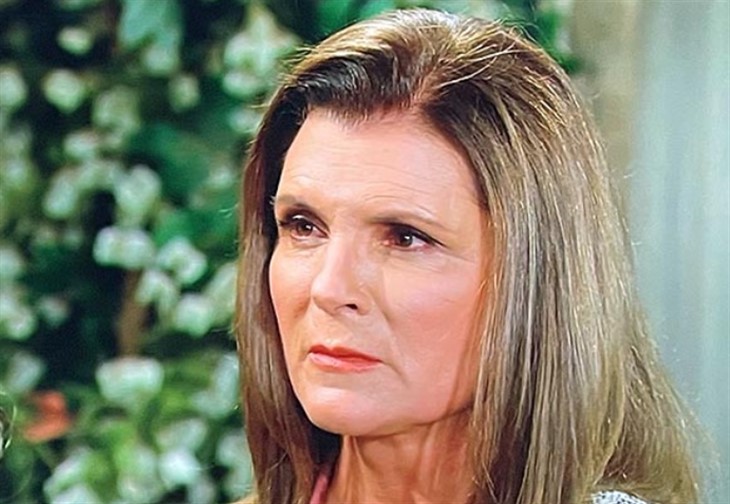 The Bold and the Beautiful spoilers document that Sheila Carter (Kimberlin Brown) is not on board with collaboration. She sees through that modern term and does not want to work with John Finn Finnegan’s (Tanner Novlan) adoptive mother.

In Sheila’s mind, she, not Li Finnegan (Naomi Matsuda), is and will always be Finn’s mother. Sheila gave birth to him and engaged in a selfless act when agreeing to Jack Finnegan’s (Ted King) faux adoption plan.

Li appointed herself Finn’s sole caregiver within hours of him being shot by his birth mother. No one knew that he did not die on that fateful night, with Sheila incredibly becoming the first person to become aware of this mega reveal.

Li did not have to provide Sheila with details about what happened to Finn from the point in the plot where Brown’s character inadvertently shot him through to his move to where Matsuda’s character is caring for him.

Devoted soap fans sensed the next turn in this story line when Li sighed and then answered Sheila’s questions in a manner that went beyond what was requested. Li’s tell to Sheila about signing Finn’s death certificate and being the only person to care for him was a major strategic mistake.

Sheila now knows that Li is isolated and cut off from Jack. That means no one knows what Li has been doing and gives Sheila the opening she needs.

Sheila took a lot of verbal abuse in past months. She also was on the receiving end of Steffy Forrester Finnegan’s (Jacqueline MacInnes Wood) two face slaps and did not retaliate.

It came as no surprise to any hardcore Sheila observer that she attempted to shoot Steffy with her first shot in the alley behind Il Giardino. There was no shock when Sheila quickly regained her composure after shooting Finn and pulled the trigger on Steffy.

Sheila struck Li twice. The first blow knocked Li down in the hallway outside of the room where Finn was recovering. But the second assault momentarily knocked Li unconscious.

Fans are anticipating Sheila’s next move, taking power from Li.

Li stated that she would care for Finn no matter what was necessary. Li’s teased bolt from Sheila will likely involve Finn being moved from the current location.

Viewers can prepare for a dangerous ride, where Sheila pursues Li and Finn. The next twist in this soapy tale should favor Sheila forcibly reuniting with the son she gave up at birth.