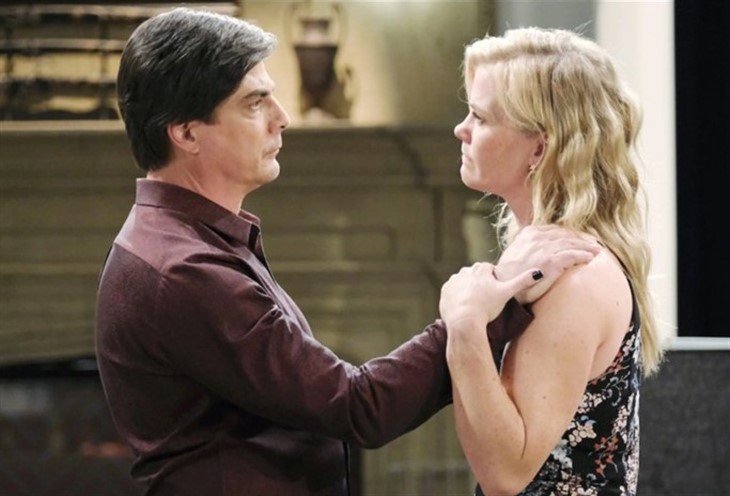 Days of Our Lives spoilers reveal quite a week in Salem as Sami Brady returns and we learn that things aren’t going so bad for her and Lucas Horton after all — at least in Sami’s mind.

Days Of Our Lives Spoilers – Lucas Horton Has Some Secrets

Things have been going from bad to worse for Lucas lately, and as per usual, it’s his own doing. Lucas (Bryan R. Dattilo) got what he wanted out of having Sami (Alison Sweeney) kidnapped last year. He got Sami grateful for rescuing him and wanting to start a life with him again and he also got EJ DiMera (Daniel Feuerriegel) put behind bars. But it was obvious Lucas wouldn’t be able to keep this secret forever, especially with Abigail DiMera (Marci Miller) nosing around trying to find out what really happened.

Now, Abigail is dead, Lucas fell off the wagon and went on a bender he can’t even remember, and Sami is back in town ready to resume life with him, so what is Lucas to do? Well, propose, of course.

DOOL will already have one wedding this week when Abe Carver (James Reynolds) and Paulina Price (Jackee Harry) get married on Juneteenth with their friends and family around them during an intimate park ceremony that Eric officiates. Will the show have a newly-engaged couple as well?

Sami seems thrilled when Lucas asks her to marry him, even though they have been married multiple times before through the years and have children and grandchildren together. However, Lucas’ guilt gets to him and he wants to tell Sami everything so they can start their new lives clean.

Lucas starts to tell Sami that he was behind the kidnapping, but he just can’t seem to get the words out. Since Sami still believes it was EJ who did it, a man she is still technically married to, she can’t imagine what Lucas wants to tell her. She even says that he can tell her anything. There are no secrets between them anymore.

Except, oh yes there are. At least one big one and maybe another bigger one as Lucas starts to wonder if he had anything to do with Abby’s death. Yes, she was his own niece, but if Lucas was in a horrible drunken state, who knows what he might have done? Stay tuned to Days of Our Lives weekdays to see how this story plays out.