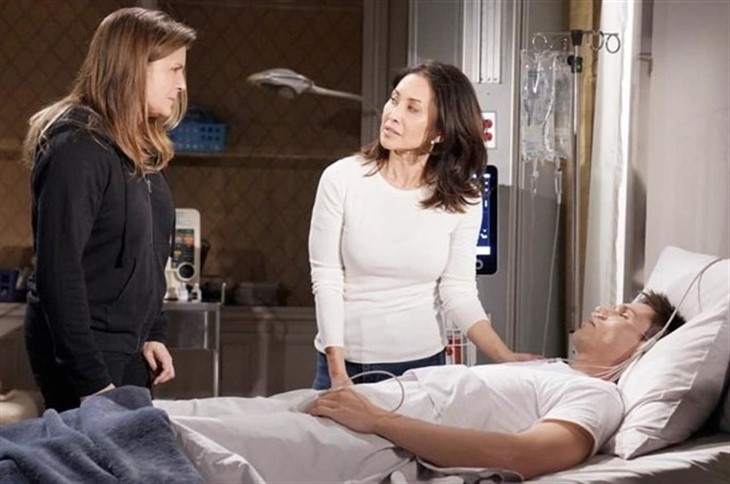 The Bold and the Beautiful spoilers document that Li Finnegan (Naomi Matsuda) has limited experience dealing with Sheila Carter (Kimberlin Brown). The only woman who was ever a real mother to John Finn Finnegan (Tanner Novlan) recognized Sheila as a problem but never anticipated the intense threat she has become.

Finn should have died after his birth mother shot him at point-blank range while intending to kill his wife, Steffy Forrester Finnegan (Jacqueline MacInnes Wood). But he showed a pulse in the ambulance while being rushed to the hospital, where Li was on call that horrible night.

So many plot points had to fall in line perfectly for Finn to be where he is now. Yet, this is the soap world where fans understand that they are not watching real life.

Believability is not the main issue, as long as a story has compelling twists and turns and ends with a satisfying conclusion. Therefore, Finn’s survived because he is young and strong. Li is a doctor who was working at the hospital where her adoptive son was taken.

Li’s decision to sign Finn’s death certificate and ability to transport him, a hospital bed, all needed medical equipment, and medicine were all accomplished by a mother who is attempting to save her son’s life. That is the point, not the surrounding details of how they got to where they are.

Sheila benefitted from Mike Guthrie (Ken Hanes) learning that his old friend was in lockup at the Los Angeles County prison facility. He intervened in Sheila’s transfer to a federal facility to enable an escape.

Since Mike accomplished the above, it is reasonable to believe that he may have determined Li’s location ahead of time and arranged transportation. Sheila’s arrival at Li’s front door, seemingly a short time after escaping and after eluding the authorities, is about her being there rather than picking at the implausible nature of it all.

Brown’s character is a soapy villain, not a real-life criminal who should have been behind bars for life based on her numerous other crimes committed on B&B and Sheila’s original show, The Young and the Restless.

The Bold And The Beautiful Spoilers – John Finn Finnegan Wins

Sheila claims to care about Finn, who might be her firstborn. But that is based on speculation regarding when her other children were known to be delivered. But what is Sheila’s endgame now that she has discovered he did not die after she pumped a bullet into his gut by mistake?

Finn needs to regain full consciousness and then his physical strength. He will remain under Li and or Sheila’s care until that happens.

If Sheila truly loves Finn, she will ensure that he reclaims his family life with Steffy. That goal is reasonable and could also include Sheila’s subsequent escape into the daytime netherworld until she inevitably returns someday.