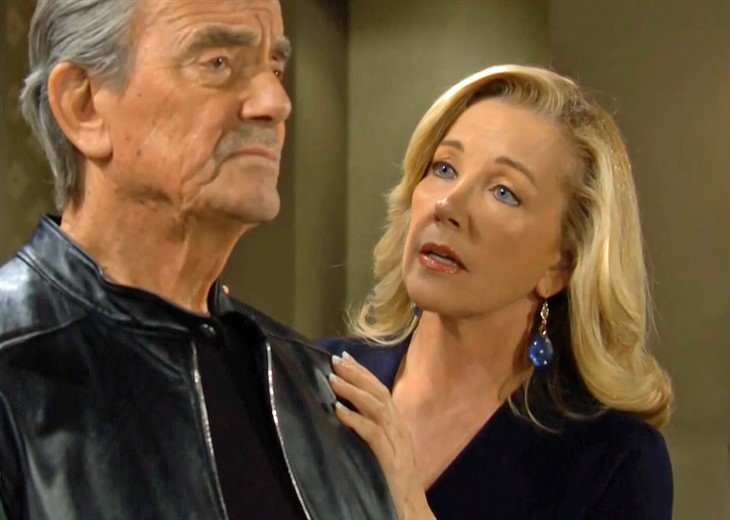 The Young and the Restless spoilers document that Nikki Newman (Melody Thomas Scott) wants Diane Jenkins (Susan Walters) gone. While this nemesis appeared to have been driven to a hot place in the otherworld in the past, everyone was shocked to learn that Diane survived Nikki’s self-defense rap to the head.

Diane’s resurrection, as she cheekily dubs it, has upset many soapy apple carts. None more so than Jack Abbott (Peter Bergman), Kyle Abbott (Michael Mealor), and Nikki. A wink to Phyllis Summers (Michelle Stafford) as well, though that itch is more in her head than reality.

Meanwhile, off in New York, Ashland Locke (Robert Newman) remains the bane of Victor Newman’s (Eric Braeden) existence. Nikki also detests him because he talked Victoria Newman (Amelia Heinle) into forgiving the moral crimes he committed against her and then somehow makes her believe that moving away from Genoa City, Wisconsin was best.

Nikki may not believe it, but Jack seems to. Diane’s main focus is Kyle.

Faking one’s murder is not the reflection of a healthy mind. Diane humbly acknowledged to an increasing number of GC residents that she was not well when Nikki believed she ended her life in what is now known as Chancellor Park.

Reestablishing a relationship with Kyle took bravery. Thankfully, Kyle retained a love for his mother, has forgiven her, and is willing to work to restore the trust he had in her before she chose to leave him behind with his father.

The Young And The Restless Spoilers – Ashland Locke Regains His Base

Similar to Diane, Ashland has one main focus. He needed Victoria to forgive him so a semblance of life could begin again.

Ashland has been legally cut out of Harrison’s life. The cruelty Victor demonstrated affected Victoria in a manner Braeden’s character did not anticipate.

Rather than agree with Victor and Nikki’s assessment of Ashland as a threat, Victoria gained what she feels is clarity. Victor used Harrison to play a game with Ashland’s life to control Victoria.

Victoria resigned as Chief Executive Officer at Newman Enterprises, reconnected with Ashland, and moved to New York with him to begin a new life. Her parents are beside themselves as a result.

As for Nikki, she reacts badly whenever Diane is near. That response is likely to grow worse in the immediate future.

Diane and Ashland are many states apart, yet they share common enemies. This natural alliance is in place whenever he and Victoria return to GC. Viewers will be ready to see how the outcasts combine to fight the upper crust on Y&R.