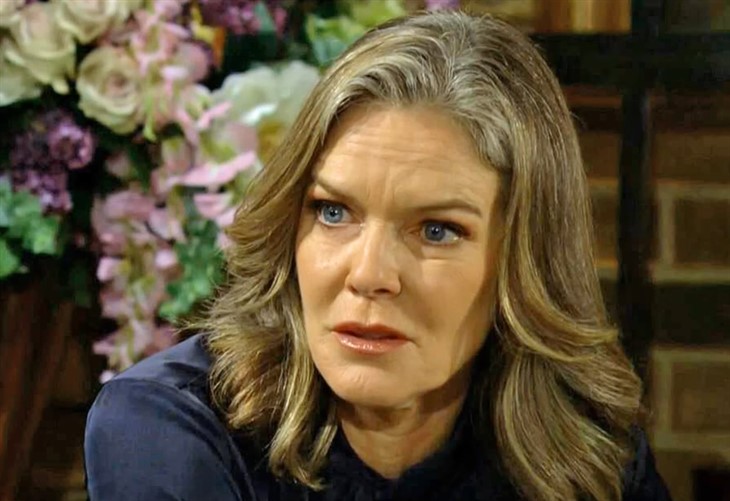 The Young and the Restless (Y&R) spoilers document that Diane Jenkins (Susan Walters) was upfront with her son. He is the only person in Genoa City, Wisconsin she can be direct with since Ashland Locke (Robert Newman) left for New York with his revived love interest, Victoria Newman (Amelia Heinle).

Kyle Abbott (Michael Mealor) is frustrated that no one will give his mother a chance. He believes she is trying to turn over a new soapy leaf. Others see Diane as a con artist who escaped legal punishment and is setting fires in GC.

Diane’s request to Kyle, asking him to help her secure a job in marketing or something similar, was intriguing. She wants to be responsible but also knows that she needs Kyle’s help to make her stay permanent.

Diane was prepared to return to Los Angeles, California. She felt that Kyle was not primed to forgive her misdeeds and saw no reason to stick around.

The plan to resume her real estate career in LA plays into Nikki Newman’s (Melody Thomas Scott) latest maneuver. Nikki remains incensed that the woman who caused her to endure a murder trial is walking free.

Kyle may have to defend whatever Michael Baldwin (Christian Le Blanc) may uncover. However, Le Blanc’s character is fond of Diane because he feels she paid for her crime through the voluntary decade-plus, self-imposed exile.

Diane has a soft spot for Jack Abbott (Peter Bergman) in her heart. She has repeatedly praised him to Allie Nguyen (Kelsey Wang), Kyle, and others as a good man.

Jack is that. But he also is savvy. Bergman’s character knows that he was open to Diane’s charms in days gone by and plans to keep his guard up in these modern times.

Yet, his recent emotional split from Phyllis Summers (Michelle Stafford) appears to allow Diane to reestablish a regular connection with Jack. Her blood to him through Kyle and, as importantly, Harrison Locke (Kellen Enriquez) is something Phyllis can not rival.

The Young And The Restless Spoilers – Diane Jenkins Has Momentum

In recent retrospect, it is remarkable how far Diane has come. She was naturally assumed dead earlier this year.

Diane’s memory was promoted positively to Kyle through his father. Others, including Nikki, rarely referenced this seemingly gone Y&R character.

As soaps go, viewers accept the implausible if the kickers to developing story lines are good. Walters’ return to the show has been solid, with this fine actor’s seamless return weaving her into various classic and new characters’ lives.

Whether Kyle’s support endures or Jack can find his way toward complete forgiveness are two good questions on Y&R. Both answers will prove significant regarding the type of progress Diane makes.