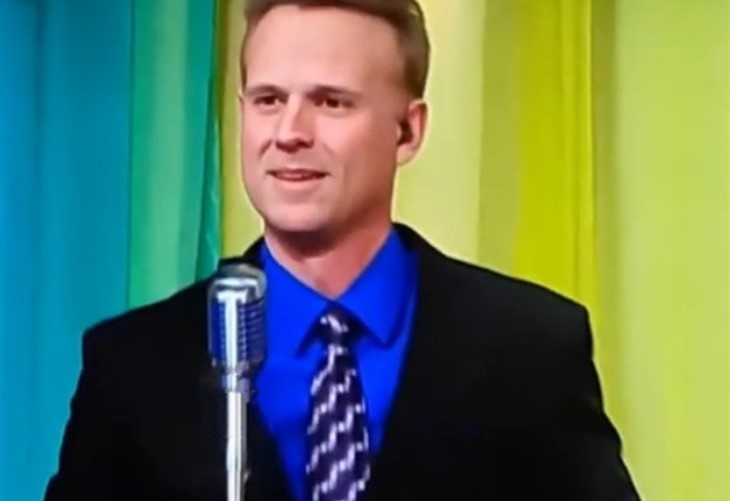 The Bold and The Beautiful spoilers and updates tease that George Gray, the announcer for The Price Is Right, will appear on BOLD on June 24.

George notes he has appeared on The Young and The Restless a couple of times, but this is his first time appearing on The Bold and The Beautiful. He jokes that he must have incriminating photos of someone out there and had said to someone previously that he wanted to be on BOLD. He mentioned a lot of The Price Is Right people had appeared previously, and then joked again about he could look good in a speedo!

George says he got a big kick out of his appearance, and wondered if his bit part would be comedic at all. He says he has done a lot of comedy in the past but saw he was playing a guy who really didn’t want to get involved in the situation!

George will be playing a waiter, and the role mirrors real life experience somewhat. He says when he was attending the University of Arizona he worked at a Red Robin restaurant. The club he will be serving at in his role is quite a few steps above a fast food joint, but the basics are the same; taking orders, delivering meals. Gray notes he did remember his way around a table and carrying plates and glasses and interacting with the clientele as necessary to perform the job. He really didn’t want to get in the middle of all the drama, but in a soap opera it’s drama, and he finds himself spilling the tea – not literally!

George plays a waiter at Eric Forrester’s (John McCook) club, where he supposedly has been going for several months to play pickleball, when the reality is very different! BOLD viewers saw him meeting with Donna Logan (Jennifer Garies) in what appeared to be perhaps a hotel, but it was revealed to be a bungalow at the club. In the episode, Eric’s wife, Quinn Forrester (Rena Sofer) and his daughter, Bridget Forrester (Ashley Jones) meet at the restaurant in the club for a meal. George, as the waiter assigned to their table, goes to take their order and engages in a little friendly conversation as many servers do to form rapport with their customers.

As George the waiter makes conversation with Quinn and Bridget, Quinn tells him her husband comes there to play pickleball. George remarks the pickleball court has been closed for renovations for several months, and Quinn is shocked – and wants him to tell her where her husband is! George is forced to share the awkward information, being in an awkward situation, looks him up and tells her which bungalow he’s renting. Needless to say, Quinn and Bridget probably don’t finish their meal, if they even got around to giving George an order, and rush to the location! What they walk in on will probably cause both of them to lose their appetite – at least for honey!