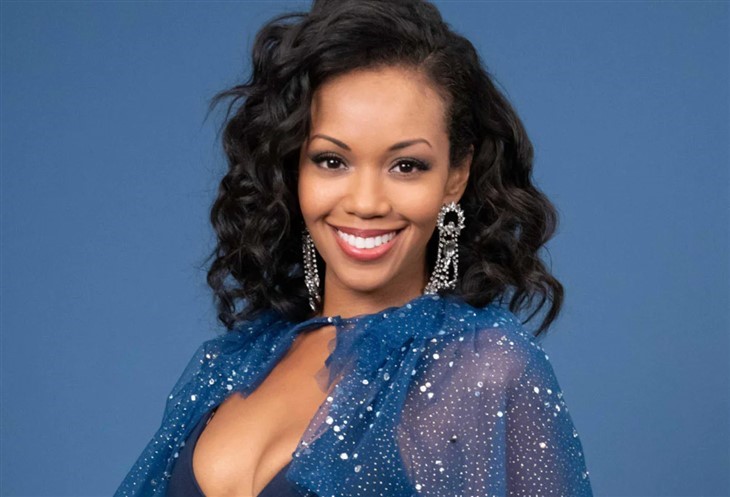 The Young and the Restless star Mishael Morgan is excited to see who will take home the gold at the 49th Annual Daytime Emmy Awards as she competes in a whole new category.

The Young And The Restless – Mishael Morgan IS A Lead

Mishael Morgan has been a part of the Y&R cast since 2013 and this year is not her first time around the block when it comes to Daytime Emmy nominations. In the past, Morgan was playing Hilary Curtis, a character who tragically died in 2018 after finally finding happiness with Devon Hamilton. Now, she is playing Hilary’s twin sister, Amanda Sinclair, who has also found happiness with Devon Hamilton.

“I was always asked do you want to submit for the Emmys, and then, after I said yes, I was asked Supporting or Lead? I always said Supporting. This is the first year that I sat down and asked myself well, why not lead?” Morgan told Soap Hub. “Why not go into the category that it deserves? I told my ‘small self’ that might have been afraid of being too ‘big’ to do it. And I got the nomination! So, I’m glad I did that.”

Y&R Spoilers – What Did Morgan Submit For The Emmys?

The year 2021 was the year fans finally learned about Hilary’s background and real family as we learned about Amanda’s. It was an emotional journey for Amanda as she mourned the twin she never knew and learned about the father who always wanted her as she got to know her mother and sister. It was this story and its important scenes that Morgan submitted for Emmy consideration.

“My reel has on it wanting to meet Imani, they meet, she tells her that she was a mistake. Amanda doesn’t take it well and she puts Naya in her place. Then, Naya wants to embrace Amanda — but it’s so she can get her to defend her father,” Morgan said. “My reel also includes the scenes where Amanda confronts her grandfather, and she lets him know how she feels about the journey he put her on. It was all about him hiding what he felt was a dirty secret. Amanda did get the family she thought she always wanted but she realized she didn’t need them.”