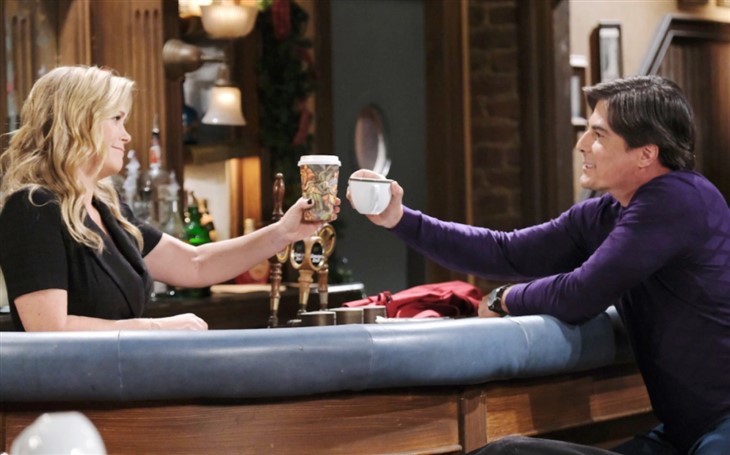 Days of Our Lives spoilers and updates tease that Lucas Horton (Bryan Datillo) and Sami Brady (Allison Sweeney) will celebrate their engagement not knowing trouble’s coming! This will take place in an upcoming DOOL episode!

Lucas thinks that no one will expose him as Sami’s kidnapper, but he is vastly underestimating EJ DiMera (Dan Feurreriegel) and Chad DiMera’s (Billy Flynn) newly forged brotherly bond! There was a time that EJ and Chad were anything but brotherly to each other, but Abigail DiMera’s (Marci Miller) murder changed that, with EJ showing true compassion and support! EJ and Belle Brady (Martha Madison) were at the mansion that night when Chad brought their two young children home from a movie and found Abigail near death in their bed!

EJ went with Chad to Salem University Hospital while Belle brought the children home to her parents’ home where Susan Banks (Stacy Haiduk) was visiting Marlena Evans (Deidre Hall). EJ came later in person to deliver the horrible news that Abigail had not survived her injuries.

Lucas shouldn’t assume that Chad, who knows the truth, won’t tell EJ – and EJ will undoubtedly tell Belle, who got him out of prison! She was able to prove EJ wasn’t Sami’s kidnapper but as far as proving who did, that hasn’t happened; Abigail had planned to travel to Wisconsin to expose exactly that fact. Chad had talked her out of it, fearing she would be in danger; little did he know that danger would come and kill her in her own bed! Chad had already suspected Lucas of killing her, and Lucas had his own doubts after waking up with no memories and his hand bandaged! Belle and EJ and Sami and Lucas will find themselves at odds over Sami’s kidnapping before the wedding takes place!

Days Of Our Lives Spoilers – Trouble’s Coming And With A Capital T!

Trouble’s coming and with a capital T the closer Sami and Lucas come to tying the knot – Chad, EJ and Belle will all be in conflict with Lucas and Sami! Belle and Sami will fight over EJ even though Sami claims she’s faithful to Lucas, and Chad will still have his doubts that Lucas is innocent in Abigail’s murder! Even though he can’t prove that Lucas killed Abigail, he can prove that he kidnapped Sami, and he, EJ and Belle will likely pursue charges!

At the very least, Sami will be shown the proof they think they have that Lucas himself kidnapped her so he could play her hero by rescuing her! But, at least at first, Sami will continue to believe Lucas that he would never have come up with such a harebrained scheme!

DOOL Spoilers – Will Lucas Horton And Sami Brady Make It To The Altar?

Will Lucas and Sami even make it to the altar with so many forces combining to split them up? Also playing into this will be Sami’s reaction when she sees her ex in a steamy moment with her sister! The finality of it all, meaning Sami and EJ’s relationship being really, really, over may hit her hard in an unexpected way! Sometimes people don’t realize what they’ve lost until it’s really gone and it just kind of sneaks up and smacks them in the face! Lucas will have to fight to keep Sami believing in him and in them before this wedding ever takes place!