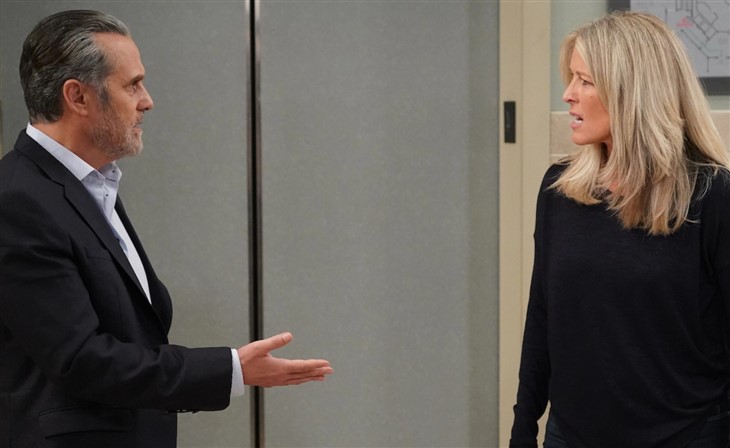 Sonny has been worried that with the amount of vitriol that Carly has for Nina Reeves (Cynthia Watros) she’ll cut him off from Donna Corinthos (Arya and Ayla Dormiani). He’s already been forbidden from seeing Wiley Corinthos (Viron Weaver) because of his relationship with Nina, and Carly won’t want her near Donna either! Things are getting serious between him and Nina, and so he wants to make sure he doesn’t have to go to court to see his daughter!

Sonny has good reason to be worried that Carly will take steps regarding Donna like Michael Corinthos (Chad Duell) did regarding Wiley. Previously, Carly had said that she would allow visitation with Donna but only for Donna’s sake; but Sonny has reason to believe Carly will change that!

Sonny tries to set up a meeting to talk with Carly about Donna, but she seems to be avoiding him; she doesn’t answer his calls or call him back. He realizes she has been busy but this avoidance is starting to become ridiculous – she’s never avoided him to this point and especially not about the kids! Sonny cannot help but think this has to do with his involvement with Nina and keeping her away from Donna, like a pre-emptive strike! He’s sure Michael has been putting his input into this situation too, just like he’s been putting his input into tearing down Sonny’s legitimate businesses!  Michael has been vehement in his goal to crush Sonny and have his revenge!

Carly keeps up the avoidance, and Sonny isn’t sure but he can guess what is going on; but so far he hasn’t been notified of any legal changes. As long as Carly hasn’t taken legal action to prevent him from seeing Donna he knows that he has every parental right to see her. Even if he and Nina married, that should not affect his visitation and he hasn’t made moves on shared custody and at this time he has no intentions to.

But if he has to, he will do what he has to do – he cannot let Michael ruin his relationship with his daughter too, by influencing Carly! Sonny decides he has to just track Carly down and pin her down to discuss this with her and set up a time to visit Donna!

Sonny tracks Carly down at her office, which is where they talked the last time about Donna and he demands his rights; he hasn’t seen Donna in a month! They need to set up a schedule so he can have time with their daughter and they need to do it now, not later! Carly remains dodgy and evasive and she keeps trying to change the subject and won’t look Sonny in the eye and he knows she’s lying – about something! He demands her to tell him if she’s changed her mind about him having visitation and a relationship with their daughter- she’s not answering! Sonny now knows he will have to do the same thing that Nina did about Wiley, and push the envelope!