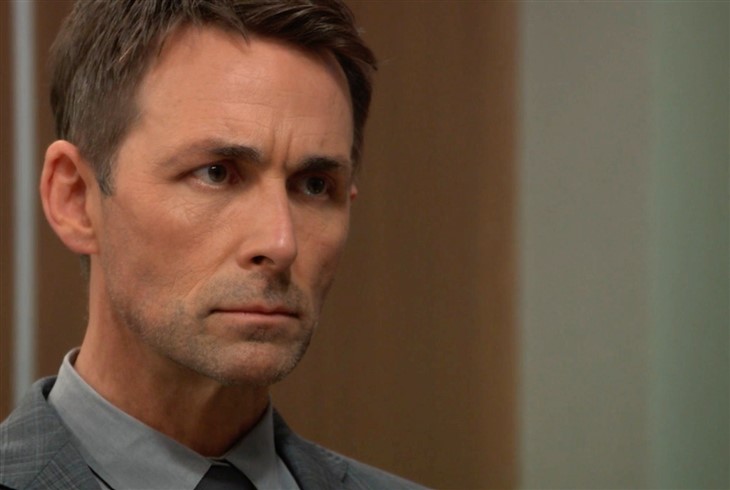 General Hospital (GH) spoilers and updates tease Valentin Cassadine (James Patrick Stuart) is going to have to fight to get what he wants. Valentin wants to have a relationship with Anna Devane (Finola Hughes). Valentin wants to hold onto his position of CEO of ELQ. Valentin may have problems with Drew Cain (Cameron Mathison) because Drew does not want Valentin to keep his position at ELQ.

Valentin knows that the Quartermaine family has wanted to get him out of ELQ. Valentin believed that ELQ helped to save him. Valentin had lost his position as a Cassadine and found that he was able to make a place for himself at ELQ. Valentin found out that Drew and Michael Corinthos (Chad Duell) want to merge ELQ with Aurora Media to give them more power to force Valentin out of ELQ.

Valentin has hoped that Ned Quartermaine (Wally Kurth) with support him because Ned is unsure about Drew and Michael’s plan. Valentin has asked his friend and lawyer Martin Grey (Michael E. Knight) to help him get Martins’ girlfriend Lucy Coe (Lynn Herring) to stand with him. Drew and Michael may be able to make their plan come together. Valentin would lose his position as CEO. Drew would want Valentin to know that he could leave the company or take a lesser role in the merged ELQ and Aurora Media. Valentin may be able to get Ned and Lucy to help to keep his position at ELQ. Drew would be upset that Valentin would continue to run the merged ELQ and Aurora Media. Drew may tell Valentin that he will find another way to get take away Valentin’s position in the company.

Valentin has wanted to be in a committed relationship with Anna for years. Valentin got closer to Anna because he was helping her deal with her nephew Peter August (Wes Ramsey). Valentin has taken Anna on their first date. Valentin got a text message from Martin that he may have problems with his father Victor Cassadine (Charles Shaughnessy). Valentin knows that Anna does not trust Victor and believes that he has committed many crimes.

Valentin may find out from Martin that Mayor Laura Collins (Genie Francis) wants to find a way to get Victor deported. Valentin may want to help Victor to stay in country. Valentin has been keeping a secret from Anna. Valentin framed Jennifer Smith (Holly Gagnier) for stealing the Ice Princess diamond. Valentin has arranged for her take the fall for killing Luke Spencer (Anthony Geary). Valentin may have been enlisted by Victor to use Jennifer for a scapegoat for his crimes. Valentin does not want to keep the secret from Anna but may need to help Victor. Valentin may have to find that he will have trouble with his relationship with Anna because he has helped Victor.