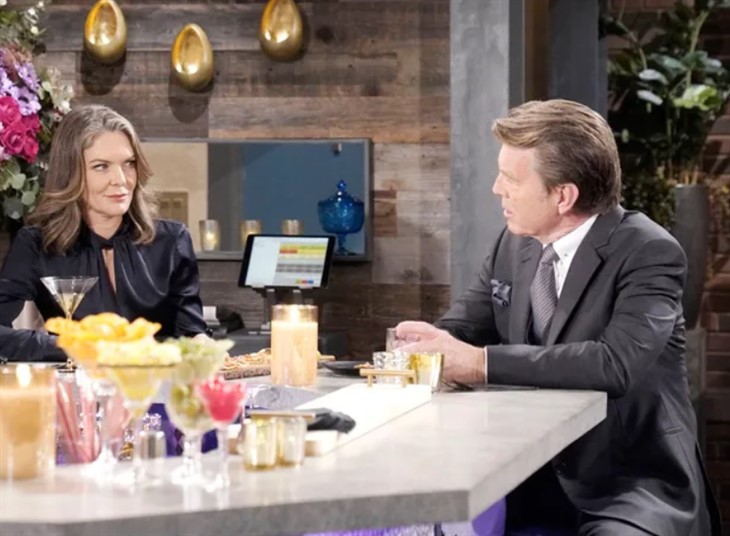 The Young and The Restless spoilers and updates for the week of June 27 tease job offers, takedown plots and romantic getaways in this week’s Y & R!

The Young And The Restless Spoilers – A Job Offer

Previous Y & R episodes revealed that Diane Jenkins (Susan Walters) needed a job if she was going to stick around Genoa City, and she’d asked Jack Abbott (Peter Bergman). Unfortunately, Jack didn’t have any openings at Jabot that would be a good fit, and likely even if he did he may not have offered one to her. Not many in town trust Diane or believe she has changed, or even is trying to change; they think she’s the same old schemer.

Jack, Diane, Kyle Abbott (Michael Mealor) and Summer Newman Abbott (Allison Lanier) are at the Abbott home when Kyle offers a solution, having given his notice at Jabot. Kyle accepted Summer’s position of CEO of Marchetti US, and says they are in agreement as he offers Diane a position in the new marketing department of Marchetti.

Longtime viewers will remember exactly how well Chelsea Lawson (Melissa Claire Egan) used to know Billy Abbott (Jason Thompson); one could say she knew him intimately! After an extremely confusing courtship when she’d accused Billy of rape as part of a con, she became pregnant with his child, now known as Johnny Abbott (Holden and Ryan Hare.) Billy had an affair with Chelsea while still married to Victoria Newman (Amelia Heinle) but Victoria accepted the baby and adopted him. Billy and Chelsea were engaged a couple of times, but never did get married. Now Billy talks to a very receptive and smiling Chelsea, telling her he’d forgotten how well she used to know him!

The Young And The Restless Spoilers – A Romantic Getaway

Viewers will have noted that Lauren Fenmore Baldwin (Tracey E. Bregman) has not been the happiest with Michael Baldwin (Christian LeBlanc) since he started working for Victor Newman (Eric Braeden)! They recently had an argument over him taking on another mission for Victor, after being kidnapped in Peru trying to get dirt on Ashland Locke (Robert Newman)! The latest “mission” is really for Nikki Newman (Melody Thomas Scott) to dig up dirt on Diane, but Lauren considers her dangerous too!

Michael figures he’d better pay his wife some seriously romantic attention pretty quick and decides on a romantic getaway, even though it’s a staycation! It appears he’s gotten them a suite at the Grand Phoenix as they close dance, telling her they’ve still got it, and her saying they never lost it!

Victor and Nick Newman (Joshua Morrow) sit at a table at Society, talking business and family matters. The subject turns to Victoria and Ashland, and her decision to turn her back on Newman Enterprises and the Newman family, and reconciling with Ashland. Word has gotten back to Victor and Nick that Victoria is in New York taking business meetings and they’ve taken it she’s starting her own company. Victor is staging a pre-emptive strike business wise, and he tells Nick that whatever venture she and Ashland are about to embark on, she’s going to hit a brick wall!