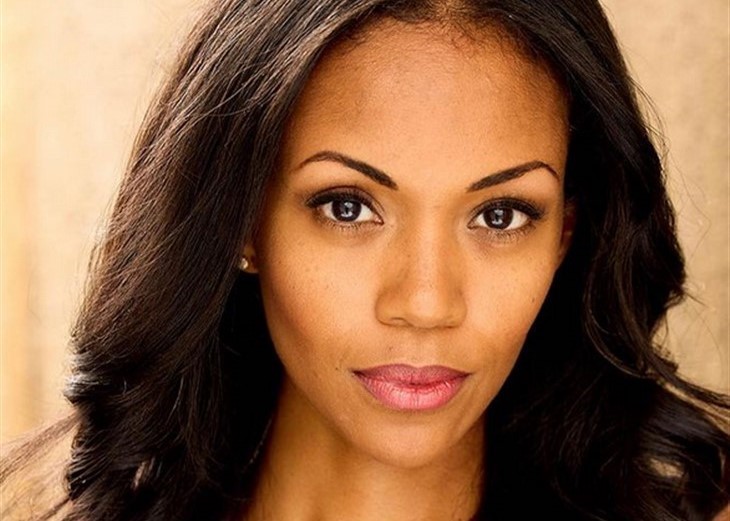 The Young And The Restless star Mishael Morgan just made history. And in an emotional acceptance speech, Mishael shared her pride at becoming the first Black woman to win the Daytime Emmys award for Outstanding Lead Actress On A Daytime Drama. However, Morgan put the emphasis on giving thanks as she reacted to the honor.

Learn what The Young And The Restless star said during her Daytime Emmys award speech. And check out what Mishael previously shared on Twitter about getting nominated. Get all the details below.

The Young And The Restless – Star Mishael Morgan Makes History

Prior to the Daytime Emmy Awards, The Young And The Restless star Mishael Morgan turned to Twitter to share her excitement at getting nominated. For instance, she described herself as “so honored.” And congratulations for her Outstanding Lead Actress On A Daytime Drama award flooded her comment section. But the actress modestly re-tweeted others’ congratulations rather than show off her achievement.

And on Friday, Mishael’s wishes came true as she made history, noted TV Line. Morgan became the first Black woman to win Outstanding Lead Actress on a Daytime Drama at the Daytime Emmys. However, the award came only after some twists and turns in the actress’ career.

When Mishael first signed onto The Young And The Restless in 2013, she portrayed Hilary Curtis. However, as a result of contract issues, Morgan then left the show five years later. And in true soap opera style, Hilary passed away after a car accident.

The Young And The Restless star’s original character’s death turned into a second chance for Morgan. And just one year after her exit, Mishael made her comeback. In her new role as Hilary’s twin sister Amanda Sinclair, the actress took home her history-making honor.

And Morgan got emotional in accepting the award. “I do not do anything in my life without first thanking God,” shared The Young And The Restless star in her acceptance speech. But she also thanked the important people in her life. First, though, Mishael made her appreciation clear.

“I thank you so much,” gushed Morgan. “This is epic.” And she thanked her sisters, her parents, and her husband. However, the actress showed her humor in discussing her husband. “I dragged [my husband] out here to Los Angeles,” she joked. “And [he] let me work and follow my dream.”

The Young And The Restless Star Reflects On ‘Breaking Glass Ceilings’

Morgan also thanked her agent. And she admitted that her agent “who met me years ago and believed in me at times when I didn’t believe me and myself.” Confessing that she felt “in shock,” the gracious The Young And The Restless star also expressed expression to the crew. But then she turned to the meaning of her win.

“I am so immensely proud of our generation. We are breaking glass ceilings left, right and center,” stated the actress emotionally. “I am so honored to be a vessel and to experience this moment, and it’s because of everybody who’s out there today proving to the world that we can and we will do this thing called equality and unity together.”

As Mishael looked ahead, she shared her past, her present, and her dreams. “I was born on a tiny island, Trinidad and Tobago, in the Caribbean,” noted Morgan. “And now I’m standing on an international stage and I am being honored regardless of the color of my skin, regardless of my passport, for being the best at what I do. And now there are little girls all around the world and they’re seeing another step forward and know that no matter the industry, no matter the vocation, no matter what, they can strive to be the best at what they do not only can achieve it, but they will be celebrated for it.”

Tell us what you think. Do you feel moved by Mishael Morgan’s emotional acceptance speech? And after you share your views, check back on our site for more news about The Young And The Restless.