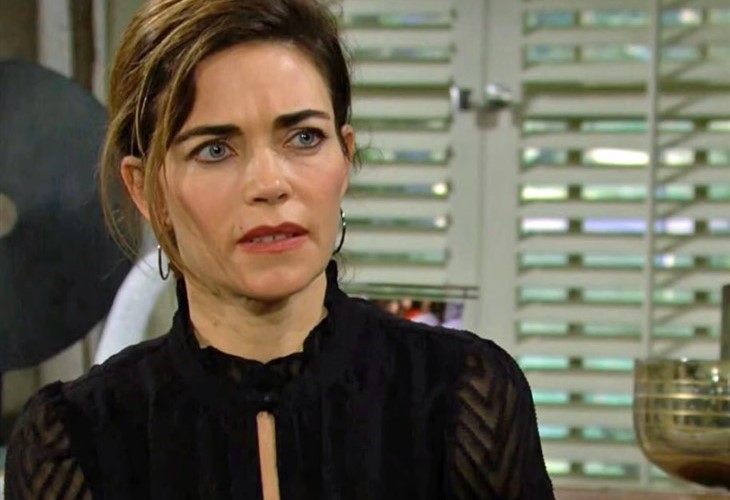 The Young and The Restless spoilers and updates tease that Victoria Newman-Locke (Amelia Heinle) has a secret agenda! Future Y & R episodes will reveal she’s not really on Ashland Locke’s (Robert Newman) side after all!

The Young And The Restless Spoilers – Full Steam Ahead

Now that Victoria has convinced Ashland she is for him and only him to the breaking of her Newman family ties, they’re ready to start their own media company. Based in New York of course, Ashland’s favorite stomping grounds, he’s elated that he has his wife back and they’re back on track. Finally, he and Victoria have worked through and beyond his schemes and lies of the past, and this is a new beginning for the two of them.

Ashland does truly love Victoria – that has never been a lie; and he feels like the two of them are truly soulmates. He has been out looking for office space for their new company and come back to their hotel room with an update.

Ashland is pleased to report he found a building formerly owned by another media company that didn’t make it, and it’s perfect for them, and it’s ready! The previous owners left all of their equipment behind and it’s state of the art equipment perfect for what Ashland and Victoria want to do with their new company! They won’t have to spend any money for retrofitting or new media equipment. Victoria agrees the building is a great find, and she tells him she already has had an attorney draw of the articles of incorporation for their new company. Now, she tells Ashland, they just have to agree on a name for their new business venture.

The Young And The Restless Spoilers – Destiny

Ashland and Victoria come up with a perfect name for their company, reflecting on their past and ups and downs that have all led to this – their destiny! They decide to call their new company Destiny Media, and it’s even romantic in a sense, because they have felt like they were each other’s destiny; especially Ashland! Victoria proceeds to add the name of the company to the incorporation paperwork and contact the attorney so they can get them filed once they’re signed.

Logos, slogans and other advertising aspects will be developed soon, and personnel hired. But for now, Victoria just needs to get the new company off the ground floor with the legalities taken care of.

Victoria has a very specific game plan, and she tells Ashland she’s already deposited $250 million dollars in their corporate bank account and he needs to do the same. Ironically – or perhaps not so ironically – that is the exact amount that Ashland has left over from Victor Newman’s (Eric Braeden) half million dollar buyout.

The Young and the Restless Star Jason Thompson Has Bad News For His Fans #YR #youngandrestlesshttps://t.co/Gz9QRytHGc

This is the money that Adam Newman (Mark Grossman paid Ashland to leave Victoria and to leave town with Victor funding the cash. The couple declares how happy they are and when Ashland, leaves, Victoria’s smile fades – and she turns her attention to her tablet where she’s working furiously on something. Little does Ashland know that her plans definitely do not include him!