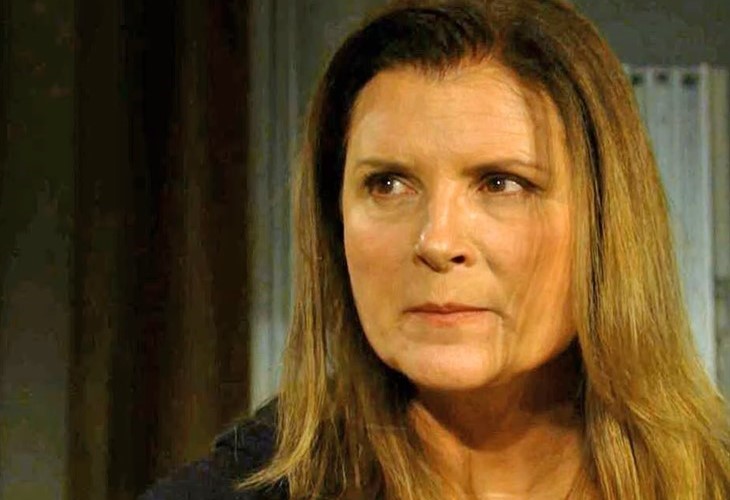 The Bold and the Beautiful spoilers document that Sheila Carter (Kimberlin Brown) realized the impossible when seeing that John Finn Finnegan (Tanner Novlan) was alive. Then she took the next inevitable step, apparently eliminating a threat.

Li Finnegan’s (Naomi Matsuda) seeming death means that, for the moment, Sheila is the only person on earth who knows that Finn was not shot dead. That means this nurse, who violated her oath to heal more than a thousand times, maybe ten-thousand, is now his sole caregiver. How scary.

Finn’s completely vulnerable state leaves him fully vulnerable to his birth mother’s deranged mind. She could keep him confined and in a drugged state indefinitely.

The Bold And The Beautiful Spoilers – Meanwhile, In Monte Carlo

Jacqueline MacInnes Wood (Steffy Forrester Finnegan) recently announced on her Instagram account that she was with B&B’s cast in Monte Carlo. That meant she was no longer on maternity leave or returned for a brief comeback to shoot some scenes during the period of absence following the birth of her third child in May.

Advanced recording schedules generally mean that shot scenes are broadcast approximately a month later. So, it is possible that viewers will soon see Steffy on-screen. She could be shown with her children, Kelly Spencer (Sophia Paras McKinlay) and Hayes Forrester Finnegan (Samantha Worden and Piper Harriet), in what would be presented as the European setting where Steffy was said to have taken the children.

Alternatively, Steffy could be seen with Forrester Creations’ personnel, potentially including other members of B&B’s cast at a fashion event. That projected reappearance would likely tie into Finn’s plight to some degree.

Finn had no awareness that his birth mother and adoptive mother faced off after leaving the room where Li was keeping him. He remarkably awoke while they were with him, which is something he may recall when regaining full consciousness at some point in the plot.

Sheila faces the same dilemma that Li had in needing a steady supply of medicine and materials to keep Finn stable. He clearly is making progress, as his awakening confirmed.

But Novlan’s character was in a precarious position while Li was heading his hoped-for recovery. What happens now that Sheila is in charge?

The Bold And The Beautiful Spoilers – Sheila Carter Again A Fugitive

Sheila’s escape from jail was particularly preposterous. Mike Guthrie (Ken Hanes) somehow knew where Sheila was held, infiltrated that prison, and facilitated her release while she was being transferred to a federal facility.

Mike’s subsequent appearance the moment after Li fled Sheila in a sport utility vehicle was equally outrageous. It enabled Brown’s character to use Mike’s vehicle to trail Li and force her off the road.

Whether the fiery crash and dump into the water ended Li’s life will soon be known. But in the meantime, Sheila has seized responsibility for Finn’s life, that she thought was tragically over.