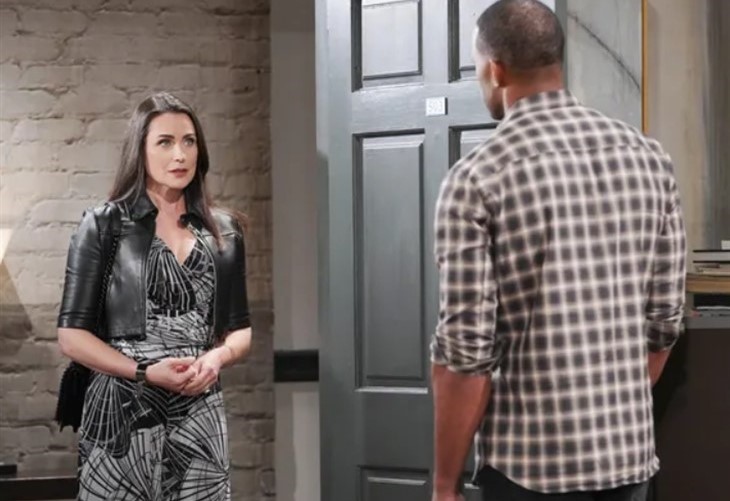 The Bold and The Beautiful spoilers and updates tease that Quinn Forrester (Rena Sofer) will rush to stop Carter Walton (Lawrence Saint-Victor) from making a huge mistake! She’ll stop his wedding to Paris Buckingham (Diamond White) in a dramatic way in an upcoming BOLD episode!

Quinn discovers her husband, Eric Forrester’s (John McCook) pickle ball games at the club have been a cover up for an affair with Donna Logan (Jennifer Gareis) for months!  Quinn and Bridget Forrester (Ashley Jones) went to the club to have some lunch and accidentally found out from the waiter that the pickle ball court had been closed for months! Quinn pestered the waiter for details on where Eric was, and he spilled that he was renting a bungalow and got the location.

Quinn and Bridget go to the bungalow and catch Donna and Eric with their pants down, literally! Afterwards, Eric and Quinn go back to the Forrester mansion and discuss the state of their marriage and he admits he wants a divorce so he and Donna can be together.

Eric knows that Carter is getting ready to marry Paris and that he really loves Quinn and Quinn really loves Carter; Eric tells Quinn to go and stop Carter’s wedding! Eric and Quinn care about each other, but also want to be with other people and dispense with the games! Quinn takes Eric’s advice, and rushes out to Il Giardino, where the wedding is taking place; she knows if she doesn’t get there in time, she’ll lose Carter to Paris! On her way on foot, she realizes she will have to take some drastic action and commanders a bicycle and pedals down the boardwalk! In her haste to avoid beachgoers, she crashes into the sand, but she quickly gets up and presses onward to the restaurant!

Quinn and Carter have been fighting their feelings for each other for a long time, as Quinn tried to work out things with Eric and Carter tried moving on with Paris. Carter admitted his feelings for Quinn to Ridge Forrester (Thorsten Kaye) but Carter tried to force them to die; it didn’t work very well. But now Quinn doesn’t have that reason she thought she had to keep working things out with Eric and he has freed her to follow her heart!

As she finally nears the restaurant, she considers what she will do when she gets there, whether to object to the wedding. She just hopes that she gets there on time before Carter and Paris say their I do’s!

Quinn finally makes it to Il Giardino and sees she’s not too late, and she’s certainly not dressed to attend a wedding! She’s in a t shirt, jacket and jeans, and socks and tennis shoes and her hair is all messed up and full of sand from her fall! She doesn’t really want to come across like she is stopping the wedding to get back at Paris, even though she isn’t one of her favorite people! But Carter needs to know that Eric wants a divorce and Quinn will be available to him – he needs to be able to made an educated decision!