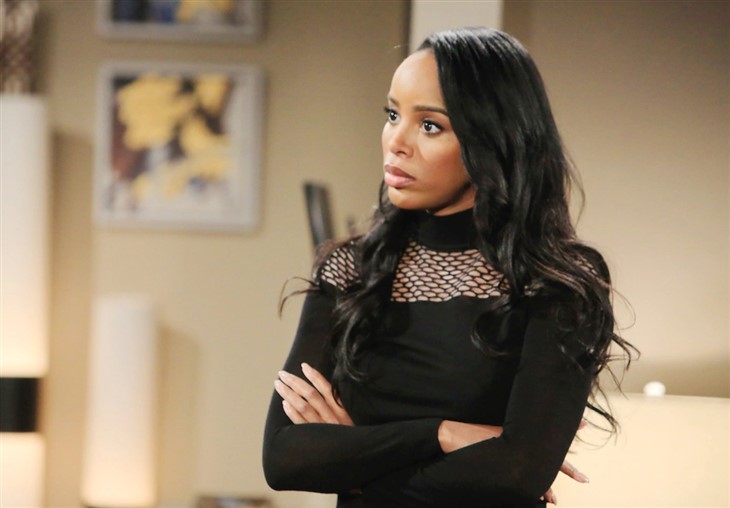 The Young and The Restless spoilers and updates tease that Imani Benedict (Leigh-Ann Rose) has sabotage plan in mind to blow up Nate Hastings’ (Sean Dominic) relationship. Y & R viewers have noted that she doesn’t care if he’s involved already with Elena Dawson (Brytni Sarpy) – she wants him!

It would seem that man-hungry Imani doesn’t seem to have scruples; she’ll pick out the man she wants and go after him, even if he’s already taken! Her sister, Amanda Sinclair (Mishael Morgan) has picked up on that tendency and Imani’s intense attraction to Nate and tried to call her off!  To no avail – not only does Imani flirt with Nate every chance she gets, she makes it a point to intimidate Elena, insinuating she’s the better woman every chance she gets!

Elena thinks that she and Nate are solid, but there’s just that little pinpoint of doubt remembering that he slept with her when she was still with Devon Hamilton (Bryton James). She could say it about herself as well, yet there is the saying if they’ll cheat with you they’ll cheat on you, that makes her a little insecure!

Imani knows that Elena is attending a conference in Hawaii, and it will be a prime opportunity to make her big move on Nate. She had made it a point to stay noticeably cozied up to him at the merger party and Amanda had warned her it wasn’t a good look; she didn’t care! Imani had even come with a date and ignored him the whole night and stayed by Nate’s side instead; no one is going to stop her from going after him! As for Nate, he either must have blinders on or he’s enjoying all the flirting and attention from Imani, and that’s not a good look either! It’s even a worse look when his significant other is out of state at a medical conference!

Nate has a legal job for Imani to do while Elena is away and hopes she can get it done by the time Elena returns. Nate wants to put Elena to work at Hamilton-Winters, and plans for her to host a medical podcast. Nate wants Imani to get Elena out of her Newman Media contract so she can come onboard at Hamilton-Winters, which of course would result in more togetherness for the couple.

The wheels are turning in Imani’s head already about how that would not be a good thing for her agenda! Imani starts looking for a way to prevent Elena from being able to get out of the Newman Media contract so she can’t free her to work at Hamilton-Winters.

The Young and the Restless Spoilers: Victoria Has A Very Specific Game Plan With Ashland In Mind #yr #youngandrestlesshttps://t.co/A84xuq5bvV

Not only does Imani want to sabotage Elena’s relationship she wants to sabotage her coming on at Hamilton-Winters as well. Imani doesn’t seem to have a lot of moral scruples so she may not have a lot of ethical ones either! She knows that in order to get her out of the Newman Media contract she would have to have access to it – and if she can get access maybe she can alter it. Newman Media is in flux with Adam Newman (Mark Grossman) stepping into his sister’s shoes at Newman Enterprises. But is Imani going to be able to fool a fellow former schemer like Sally Spectra, (Courtney Hope) who is now in charge of Newman Media? After all, it takes one to know one!