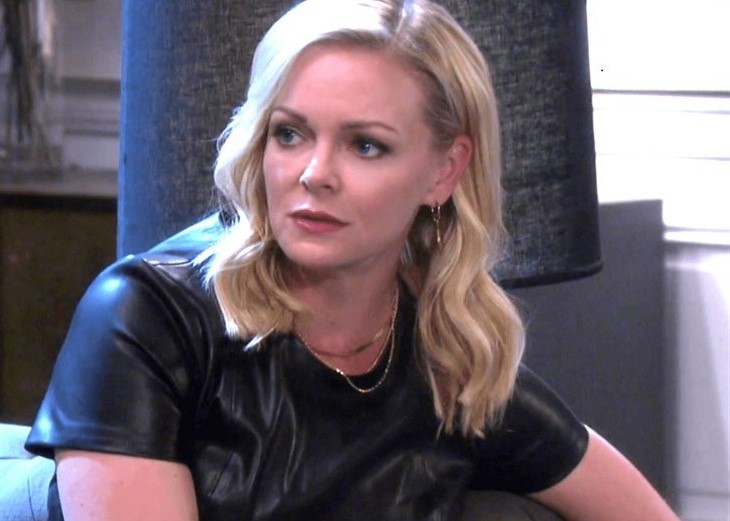 Days of Our Lives spoilers and updates tease that Belle Brady (Martha Madison) will have an attack of conscience after her tryst with EJ DiMera (Dan Feurreriegel). She’ll wonder if they made a mistake in an upcoming DOOL episode!

Belle knows that mistakes are made in the heat of passion, and after the fact, she wonders if she and EJ have made one. They both had a bit of revenge motivating them in spite of the deep bond they had formed inside; Belle is now asking herself is revenge really a good start? This escalated so quickly for them besides, are they taking things too fast-her divorce isn’t even final yet, although she could speed that up.

Shawn really didn’t want to get divorced, Belle is the one who pushed for a separation; and that had been to give Shawn a chance to ditch Jan Spears (Heather Lindell)!  But now she has given birth and named the baby after Shawn – Shawn Christian Brady (uncast infant); so Shawn agreed to give the baby his last name! Belle didn’t think she could live with that and wouldn’t have even been able to stand to look at the baby – he would just remind her of Shawn’s infidelity! Belle knows the baby is the innocent party in all this, but she just can’t get past seeing Shawn in bed with a double of herself and keeping the sordid secret!

Days Of Our Lives Spoilers – Will Sex With Her Sister’s Ex Damage Her And Sami Brady’s Relationship?

Another thing that Belle is struggling with is whether sex with her sister’s ex will damage her and Sami Brady’s (Allison Sweeney) relationship? EJ already told Sami when she brought the divorce papers for her to sign that Belle was more than his attorney, which shocked Belle a little bit! They hadn’t even gone up to bed at that point, and they had some discussion about whether they were sleeping with each other to get back at their exes!

Belle and EJ worked through that and steamily consummated their relationship, but now on the morning after Belle feels guilty and is questioning herself!  Did she and EJ make a marvelous start or a rushed into mistake?

EJ can tell there’s something wrong, and asks Belle to talk to him about it – she admits her worries about if they did the right thing at the right time! EJ says he has no regrets and neither should she – the situation with Shawn and Jan is intolerable; any woman would have had problems with that!  As for worries over Sami, Sami has made her decision and she wants Lucas, not him. EJ has accepted that and whatever happens, he’s made his decision and he wants Belle! EJ tells Belle maybe a trip away from Salem together might be in order soon!