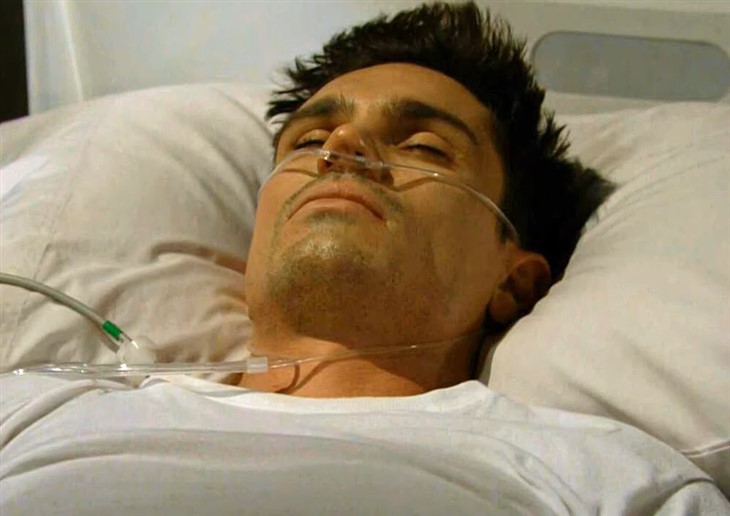 The Bold and the Beautiful spoilers for the week of June 27 reveal that Sheila Carter (Kimberlin Brown) will realize she’s out of her element caring for John “Finn” Finnegan (Tanner Novlan). It is hinted that Finn’s heart could stop, which leads to Sheila being forced to use the shock paddles. So, let’s discuss what could happen when this scene airs.

The Bold And The Beautiful Spoilers – Li Finnegan’s Death

B&B spoilers reveal that Sheila was furious when she learned that Li Finnegan (Naomi Matsuda) secretly kept Finn alive. After Sheila knocked Li out, the doctor realized she needed to get help but had to do so carefully. So, Li tricked Sheila into thinking that they were on the same side.

Unfortunately, Sheila caught onto Li when she tried to call the police. After an intense high-speed chase, Sheila caused Li to go over the bridge and land in the water. Li is presumed dead, but in soaps, anything can happen.

Once Sheila gets back to Li’s hideaway, she will be in charge of keeping Finn alive. Sheila always tells everyone how she used to be a nurse. While that is true, it’s been several years since she’s practiced. So, Sheila will be out of practice and out of her element.

It is teased that Finn will go through a medical emergency that Sheila is unprepared to handle. Sheila will feel overwhelmed but will be determined to save Finn’s life.

The Bold and the Beautiful spoilers reveal that during the week of June 27, Finn’s heart could stop. Sheila gets out the shock paddles, which indicate that Finn suddenly flatlines.

Li did mention that Finn needed medication while he was in a coma. Li might have just been saying that to find a way to escape. Of course, it’s entirely possible that Li was being truthful. In any case, Sheila seems to use the shock paddles to restart Finn’s heart.

It is known that Sheila will show Mike Guthrie (Ken Hanes) Finn and explain what happened. Of course, Sheila’s version of events will be a bit different than what actually led to Finn and Steffy Forrester Finnegan’s (Jacqueline MacInnes Wood) conditions. It is teased that Mike will help Sheila take care of Finn and nurse him back to health.

Knowing Sheila, she will try to explain things to Finn once he wakes up… provided he has any memory of the shooting. Sheila will also use her restarting Finn’s heart as a way to redeem herself. However, Finn’s heart never would have stopped to begin with if he hadn’t been shot, which wouldn’t have happened if Sheila never tried to murder Steffy.

How will Sheila explain her actions to Finn? What will Finn do to escape Sheila once he wakes up? At some point, Finn is going to want to leave the hideaway, which means everyone will find out that he’s alive. Sheila will also have to explain Li’s disappearance. So, we will have to keep watching to see what happens next.