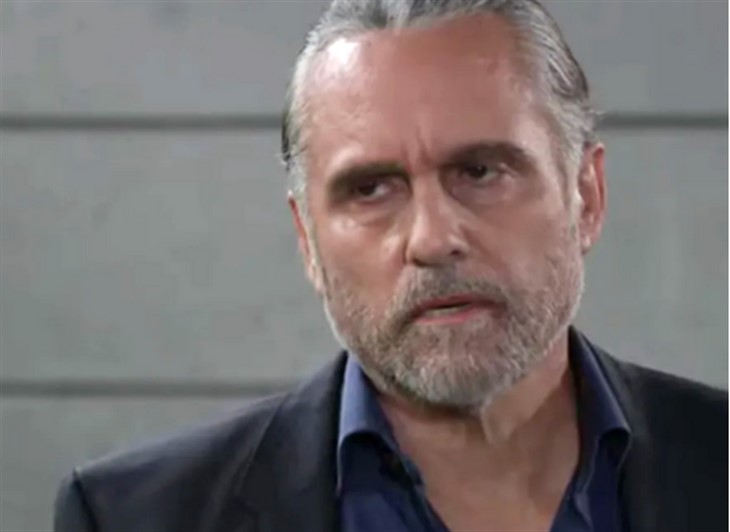 General Hospital spoilers and updates tease that Sonny Corinthos (Maurice Benard) will confront Spencer Cassadine (Nicholas Chavez)! He’ll talk some sense into him – or try to – in an upcoming episode of GH!

Sonny has to wonder what’s happened to this brat since he came back to Port Charles; he has caused nothing but trouble since he returned from boarding school in France. Sonny is pretty sure it is all attributable to Esmé Prince (Avery Kristen Pohl) who he could tell was trouble when he met her. Esmé told Sonny that Nikolas and Ava Cassadine (Marcus Coloma, Maura West) were taking Avery Jerome-Corinthos (Ava and Grace Scarola) out of the country, and it was a lie!

Sonny also suspects that Esmé was behind the teddy bear with Ryan Chamberlain’s (Jon Lindstrom) voice and the other “gifts” meant to scare Ava. And yet, Spencer covered up for her and had told them he was behind it!

Sonny sits Spencer down and tells him they need to talk, and they need to talk now – Sonny is his maternal uncle, his late mother Courtney Matthews’ (Alicia Leigh Willis) brother. Spencer has known Sonny as “Uncle Sonny” since he was a very small child, and Sonny has always been protective of him. Sonny knows that Spencer has gotten in some trouble over the past few months and he totally blames Esmé for all of Spencer’s troubles. He tells Spencer that he needs to get rid of this girl – she’s trouble with a capital T and he’s convinced she’s the source of all of his! Spencer still doesn’t want to be forthcoming with Sonny about his real plan!

Spencer has had his own plots and plans to expose Esmé and exonerate Trina Robinson (Tabyana Ali) but none have worked so far! The last one went down at the Metro Court Pool and it was a total disaster, and Sonny heard about it—that’s why he wants to talk to Spencer. If he needs someone exposed and taken down he needs to quit amateur hour; Sonny can have Brick (Stephen A. Smith) do a deep dive into this girl!

Sonny is sure that he can help Spencer expose Esmé and exonerate Trina – he found out from Laura Collins (Genie Francis) that she has an obsession with Ryan Chamberlain too. Sonny tells Spencer about what Laura told him about Esmé being with Chamberlain in GH, and how Felicia Scorpio (Kristina Wagner) tried to warn her against him!

Spencer is shocked at the news – he had no idea Esmé had anything to do with Ryan other than researching to scare Ava! He had received some letters from him while in school and refused them, and he knew he was in Spring Ridge. Victor Cassadine (Charles Shaughnessy) had him protected while he was in there against Ryan, among other things. But Spencer flashes back to that letter from Maggie Fitzgerald (uncast character) and her comments about Esmé finding her birth father could not lead to anything good. Now he wonders if Esmé found her birth father – although he doesn’t mention to Sonny. But Sonny has definitely made him realize Esmé may be much more dangerous than he thought!