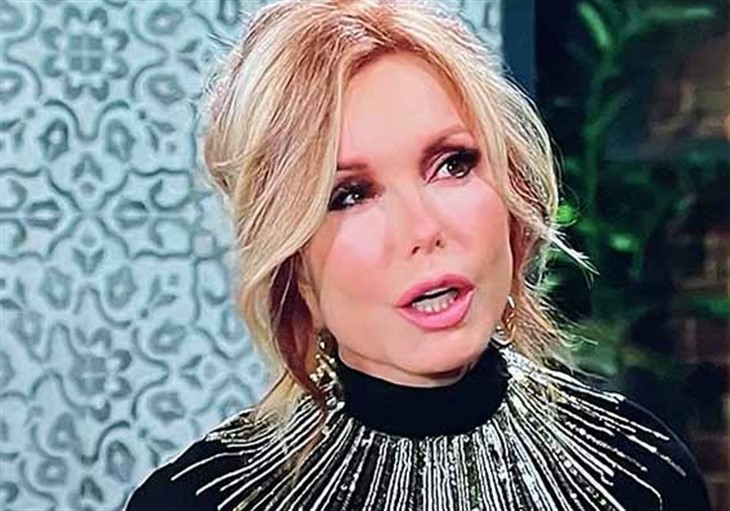 The Young and The Restless spoilers and rumors tease that Sheila Carter (Kimberlin Brown) is on her way back to Genoa City, on the run again after wreaking havoc in LA! Longtime Y & R viewers know that Lauren Baldwin (Tracey E. Bregman) better watch out!

By the time Sheila’s son John “Finn” Finnegan (Tanner Novlan) and his wife Steffy Forrester Finnegan (Jacqueline Macinnes Wood) are reunited, Sheila will have nothing left to lose. Sheila’s been in LA, the land of The Bold and The Beautiful, and her son, who was in a coma will likely remember everything. Sheila shot Finn accidentally when she was aiming for his wife Steffy, and he jumped in front of her; he won’t want anything to do with her when he remembers!

Sheila will once again escape the police and go on the run, and rumor has it she’s headed back to Genoa City! Longtime viewers will remember an ongoing feud Sheila had with Lauren, and she tried to kill her several times – including once trying to drown her in a hot tub!

Longtime viewer will remember Sheila was a nurse at Genoa City Memorial Hospital in 1990, so she’s been around for a while. Sheila fell in love with Lauren Fenmore Baldwin’s (Tracey E. Bregman) second husband, Scott Grainger (Peter Barton) who was a doctor there at the time. Sheila became obsessed with Grainger, and drugged him, and they had sex, which resulted in a pregnancy. Lauren and Sheila were pregnant at the same time, but Lauren didn’t tell Scott about her pregnancy. Sheila lost her baby, but when the truth came out he divorced Lauren and married Sheila, Sheila later swapping Lauren’s baby with a black market baby.

Sheila has several other children, some of whom were raised by a sister during the time she lived in Genoa City, but she claims that they’ve all rejected her. Viewers will remember two of them, Ryder Callahan (Wilson Bethel) and Daisy Carter Romalotti (Yvonne Zima) his twin, with whose father was Tom Fisher (Roscoe Born). Also during her time in Genoa City the conflict raged on between her and Lauren and she tried to murder her several times.

Sheila never did really get over her feelings for Scott Grainger, however, and that is what drove her. Sheila even tried to kill her own mother Molly Carter (Marilyn Alex) by trapping her and Sheila in a barn, which she set on fire and faked her own death.

Finn and Sheila’s grandson, Hayes Forrester Finnegan (Piper Harriot) were Sheila’s last chance to get it right and be a good mother and grandmother. When Finn rejects her, she’ll have no reason to stay around Los Angeles and will likely return to Genoa City. Los Angeles is a big city, so whether Sheila and Diane Jenkins (Susan Walters) know each other and will reconnect is uncertain. But like Diane, Sheila is always claiming redemption and wanting another chance! There’s a chance they may connect when Sheila reaches Genoa City, and Sheila, like Diane, will stick around!