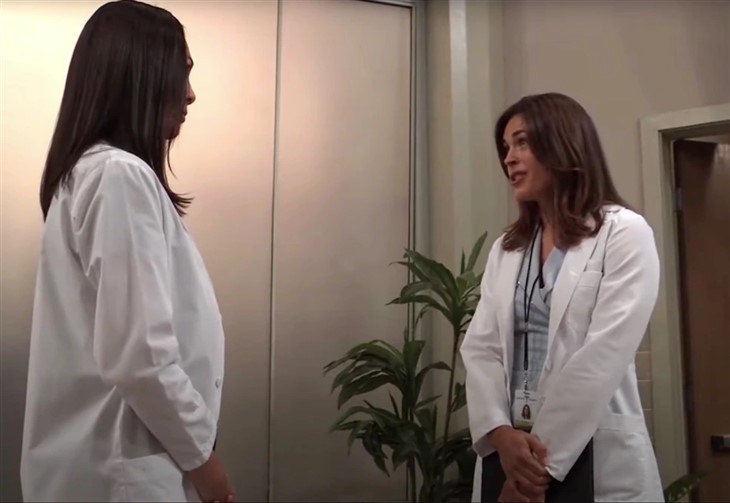 General Hospital (GH) spoilers and updates tease Dr. Britt Westbourne (Kelly Thiebaud) is attempting to move on. Britt has hoped to find a new love. Britt has gotten help to find love from her mother Dr. Liesl Obrecht (Kathleen Gati) and her best friend Brad Cooper (Parry Shen). Britt has become friends with Dr. Terry Randolph (Cassandra James). Britt knows that Terry has been having trouble with having a relationship. Britt and Terry may be able to help each other to find love again.

General Hospital Spoilers – Dr. Britt Westbourne Struggles To Get Over A Lost Love

Britt had gotten to know Jason Morgan (Steve Burton). Britt had hoped that she and Jason could have a future together. Britt needed Jason to help her to save Liesl when she had been kidnapped by Peter August (Wes Ramsey). Jason was able to help Britt to save Liesl but lost his life. Britt was devastated by Jason’s death. Britt had been able to open up to Jason about her medical condition. Britt had been diagnosed with Huntington’s disease. Britt has told Liesl about her condition.

Terry had decided to use Society Setups to find a new love. Terry had been matched with a potential romantic partner. Terry tried to find common ground with her date but ended up meeting Chet Driscoll (Christopher Van Etten). Terry and Chet found that they had much in common. Terry had been looking forward to exploring her relationship with Chet. Terry and Chet got resistance to their relationship from Chet’s sister Amy Driscoll (Risa Dorkin). Amy decided to help Chet to get job that he had wanted but Chet would have to move out of Port Charles. Terry was upset to find out that Chet was going to move away but she believed that Chet needed to take the job. Terry has hoped that she might be able to keep in touch with Chet. Terry may not be able to keep her relationship with Chet.

General Hospital Terry may have to find a new love. Terry and Chet may not be able to find a way to stay together. Will Terry need to move on without Chet? Terry wants to help Britt to find love again. Terry knows that Britt has not been able to put her past with Jason behind her. Can Terry help to encourage Britt to take a chance find someone new to love? Terry may believe that Britt could have a future with Cody. Will Terry help to get Britt and Cody together? Be sure to catch up on everything happening with GH right now. Come back here often for General Hospital spoilers, news, and updates.