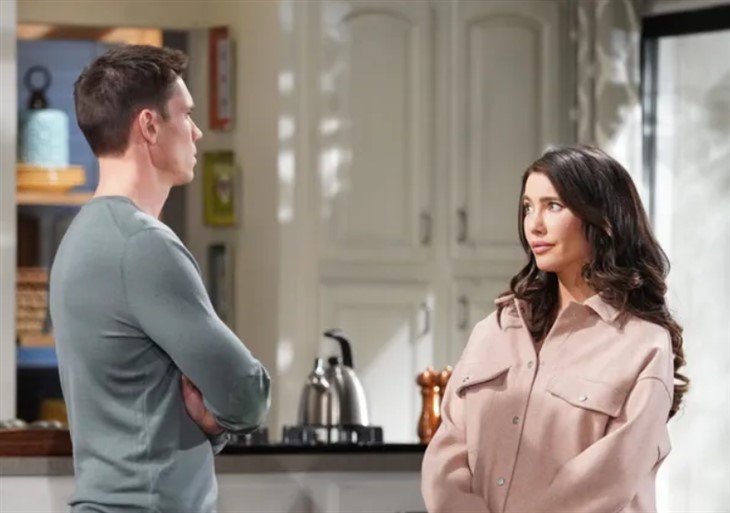 The Bold and the Beautiful (B&B) spoilers and updates tease Steffy Forrester (Jacqueline MacInnes Wood) has been dealing with a devastating loss. Steffy believes that her husband Dr. John Finnegan (Tanner Novlan) was killed by his biological mother Sheila Carter (Kimberlin Brown). Steffy has left Los Angeles to try to find a way to deal with losing Finn. Steffy does not know that Finn is alive and trying to come back to her.

Steffy found out that Sheila had sabotaged Brooke Logan Forrester’s (Katherine Kelly Lang) sobriety. Sheila had targeted Brooke because she believed that Brooke wanted to keep her away from Finn and her grandson Hayes Finnegan (Piper Harriot). Steffy confronted Sheila in the alley behind Il Giardino. Sheila was going to shoot Steffy but ended up shooting Finn. Steffy and Sheila believed that Finn had died.

Sheila shot Steffy and arranged the scene to appear to be a robbery. Steffy could not remember that Sheila had shot her. Steffy was able to remember that Sheila shot her and Finn. Sheila was arrested and Steffy believed that she needed to get some distance to heal. Steffy has taken Hayes and her daughter Kelly Spencer (Remington Blaire Evans) with her on her trip. Steffy is having trouble letting Finn go.

Finn was saved by his adopted mother Dr. Li Finnegan (Naomi Matsuda). Li was told that Finn would not survive but she could not accept that he would not be able to recover. Li confronted Sheila in jail about Finn. Li did not know that Sheila would escape from prison and want to find out what Li had done about putting Finn to rest. Sheila was shocked to find that Finn was alive. Finn woke up briefly and fount Li with Sheila. Li wanted to find a way to get away from Sheila but her car went off the road. Sheila believes that Li is dead. Sheila is determined to find a way to help Finn to make a full recovery. Finn is struggling to find a way to recover and be with Steffy again.

The Bold And The Beautiful Spoilers – Steffy Forrester And Dr. John Finnegan Desperate To Reunite

The Bold and the Beautiful Steffy has tried to envision a future without Finn. Steffy knows that she needs to be a mother to Hayes and Kelly. Steffy wants to find a way to move on but she feels that she cannot get over losing Finn. Will Steffy find out that Finn is alive? Steffy will be overjoyed when she finds out that Finn is alive.

Finn wants to find a way to recover and be with Steffy again. Finn will have to find a way to deal with Sheila before he can get to Steffy. Can Finn find a way to convince Sheila to help him to go to Steffy? Finn and Steffy will need to decide what they will do about Sheila. Will Steffy and Finn be able to deal with Sheila in order to be together? Be sure to catch up on everything happening with B&B right now. Come back here often for The Bold and the Beautiful spoilers, news, and updates.