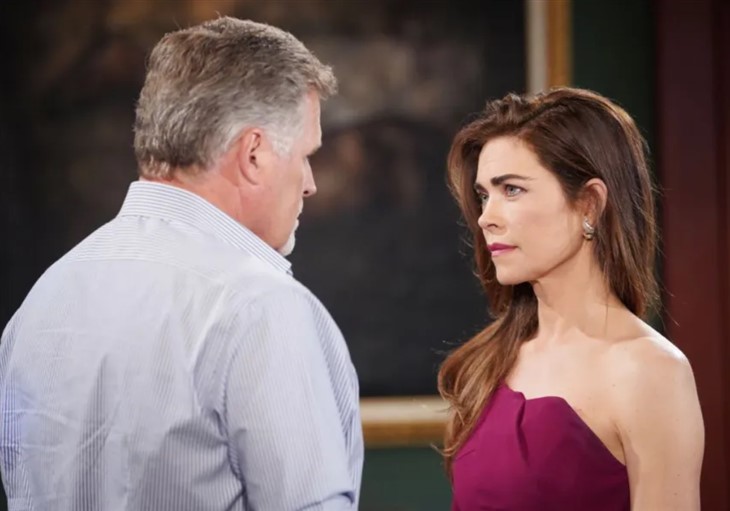 The Young and the Restless (Y&R) spoilers document that Victoria Newman (Amelia Heinle) withheld crucial information from Ashland Locke (Robert Newman). When asked if she told anyone about them being in New York, Victoria said no.

But viewers know that Victoria told her older brother, Nick Newman (Joshua Morrow), where she and Ashland went. That was by design.

Nick does not appear to be clued into Victoria’s plan, but he theoretically could be. His recent comments about wanting to be more involved in the family business establish him as Victoria’s secret confidant. But another person would seem more likely.

The Young And The Restless Spoilers – Nikki Newman Is The COO

Corporate titles are cheeky. They have evolved through the decades as people’s egos need to be fed, and the evolving nature of business creates specialized spots in the white-collar rat race.

Nikki Newman (Melody Thomas Scott) was Victoria’s choice as her co-Chief Executive Officer. The Chief Operating Officer spot that Nikki stepped back to does not need to be defined within this feature as it is not a digital quarterly report.

Most importantly, Nikki distrusts the new CEO, Adam Newman (Mark Grossman), that Victor Newman (Eric Braeden) appointed as much as Victoria. Nikki told her husband she could keep a better eye on him as COO, with Victor’s switch being more impactful if he was the stand-alone boss.

Victoria seemed subtly condescending to Ashland while he was talking with her about how they could fund their new company. Victoria’s tell to him, about all investors turning them down, seemed part of her plan.

She leaked the New York news to Nick. She somehow knew he would pass that along to Victor and that their father would then put a chill into the New York air.

The lack of investors surprised Ashland. He immediately suspected Victor, which highlights the apparent weak part of Victoria’s plan.

It appears as though Victoria wants Ashland to surrender the remaining half of the money he was paid by Victor to leave Newman-Locke and grant an annulment to Heinle’s character. Her goal would be to get him to put all his remaining funds into their startup.

The Young And The Restless Spoilers – Ashland Locke Does Not See The Second Slam?

Ashland was fooled by Victoria into believing she wanted to run away with him. She revealed her first scheme to him at that time. However, his subsequent rescue of her after the car crash that killed Rey Rosales (Jordi Vilasuso) seemed to produce a fresh start.

The Young and the Restless Star Mishael Morgan Opens Up About Her Historic Daytime Emmys Win #yr #youngandrestlesshttps://t.co/cgZqgMmZAj

If Victoria is plotting to take Ashland down, in what is a second scheme, her life could be endangered. Could Ashland handle an unexpected second slam that would represent the true end of his hopes to have a life with the woman he loves?

The answer to the above question would seem to be no. What happens after that assumed climax will be worth the watch this summer on Y&R.