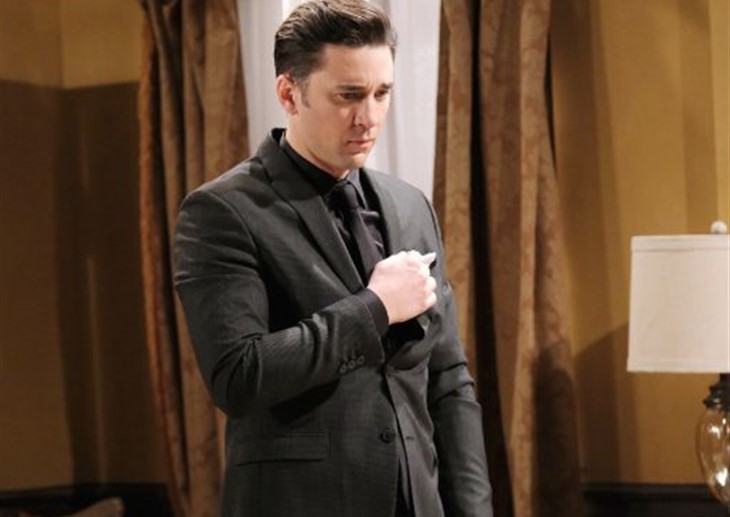 Days Of Our Lives spoilers and updates tease that Chad DiMera (Billy Flynn) won’t be alone mourning for Abigail DiMera (Marci Miller). His friends and family will support him as he tries to adjust to life without her in future DOOL episodes.

It’s time for Abigail’s funeral to take place, and Chad isn’t sure if he can even face the day, let alone not totally break down when it’s time to say goodbye. He couldn’t even bear to pick out a dress for her to be buried in, and Jennifer Deveraux (Cady McClain) had to do it for him. It was difficult for her as well, even though Jack Deveraux (Matthew Ashford) went in with her – both of them had tears in their eyes.

Chad is despondent but is comforted when family and friends show up to support him including Will Horton (Chandler Massey) and Sonny Kiriakis; (Zach Tinker) his two very best friends. Tony DiMera (Thaao Penghlis) arrives home as well and rushes to Chad’s side, having been away when the tragedy happened.

The hugs from Sonny, Will and Tony all help Chad somewhat, but he still feels disconnected and very much in denial; he did make it through telling the kids. Telling the little ones Mommy wasn’t coming home was hard enough, but now he has to explain about telling her goodbye. He debates whether they should even see Abigail in the casket or being buried in the ground – that is a very frightful thing. Chad is in an awkward emotional flux state of wanting to be alone and yet not wanting to be alone – Sonny, Will and Tony are different. Then Chad’s mind begins to change and he feels he cannot accept Abigail’s death until he knows who caused it!

There really is no refuge for Chad – and he doesn’t think he can handle seeing her be put in the ground, so he leaves before the burial! He decides he cannot hang around for that and doesn’t want to subject the children to it either, with the possibility of their having nightmares. They haven’t even had pets that they have had to deal with losing, and here some monster killed their mother and they have to deal with losing her!

Chad just simply feels lost and soon he comes to a place where grief and sorrow are replaced with rage! He has to know who did it – who took away his wife and their children’s’ mother!

Rage soon becomes revenge, and Chad is almost obsessed with finding Abigail’s killer and making sure they pay; the longer the police have no leads, the more frustrated he becomes. Soon, Rafe Hernandez (Galen Gering) develops some significant leads and makes an arrest; when Chad goes to the station demanding answers, Rafe tells him there’s been a break. Chad goes ballistic right there in the police station and Rafe has to restrain him from taking matters into his own hands and killing the suspect! Chad will become consumed with revenge and see himself as judge, jury and executioner and as far as he is concerned, any person of interest will be guilty before proven innocent!