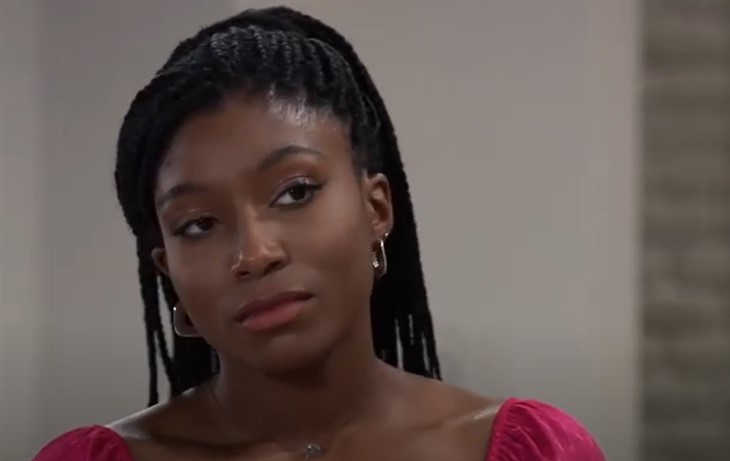 General Hospital spoilers tease that Esme Prince (Avery Kristen Pohl) seemingly thought of everything in regards to her devious plan to frame Trina Robinson (Tabyana Ali) for recording Cameron Webber (William Lipton) and Josslyn Jacks (Eden McCoy) having sex and then spreading it all over the internet.

Trina actually has an alibi for the exact time the videos were posted online, But it’s not a guarantee that it will prove Trina’s innocence because the video could have been scheduled ahead of time to post at a certain time. But Trina hasn’t come forward with her alibi up until now because she is protecting Spencer Cassadine (Nicholas Chavez) from possible serious trouble.

General Hospital Spoilers: Laura Fears Victor Will Cause Trouble For Anna And Valentin

As viewers know, Spencer was serving a thirty-day sentence at Spring Ridge for stalking and tormenting Ava Jerome (Maura West). And while Spencer had resigned himself to completing his sentence, he was upset that he couldn’t visit his mother’s grave on her birthday. He begged his uncle Victor Cassadine (Charles Shaughnessy) to use his connections to arrange for Spencer to sneak away for a few hours so that he could put flowers on her grave.

Trina couldn’t believe Spencer was there and although she sympathized with him, she pointed out that he used his privilege to break the rules and would most likely get away with it. Trina eventually agreed that she wouldn’t rat Spencer out and even covered for him when Police Commissioner Jordan Ashford also coincidently showed up at the cemetery. Trina didn’t want to cause Spencer to have more time added to his sentence or be faced with other criminal charges!

Having an alibi isn’t a sure way to prove her innocence because the prosecution could suggest the video could have had a timer set to upload automatically at a specific time. And because it isn’t a sure thing, Trina hasn’t been willing to reveal that Spencer snuck out of prison for a few hours. Upon finding out what Spencer did, the District Attorney could file additional charges and get additional prison time. But as her case goes to trial, she may have to reveal her alibi if the case doesn’t seem to be going well. It would be ironic if Trina has to betray Spencer to save herself because Spencer is secretly working to get proof of Esme’s guilt and has even stayed in their relationship in the hope that Esme will eventually slip up!

Should Trina have already tried to save herself by throwing Spencer under the bus? Could Spencer have to spend additional time in prison? Or will the district attorney just let it go? Anything can happen in Port Charles so stay tuned to General Hospital airing weekdays on ABC. And don’t forget to check back right here regularly for all your General Hospital news, information, and spoilers!