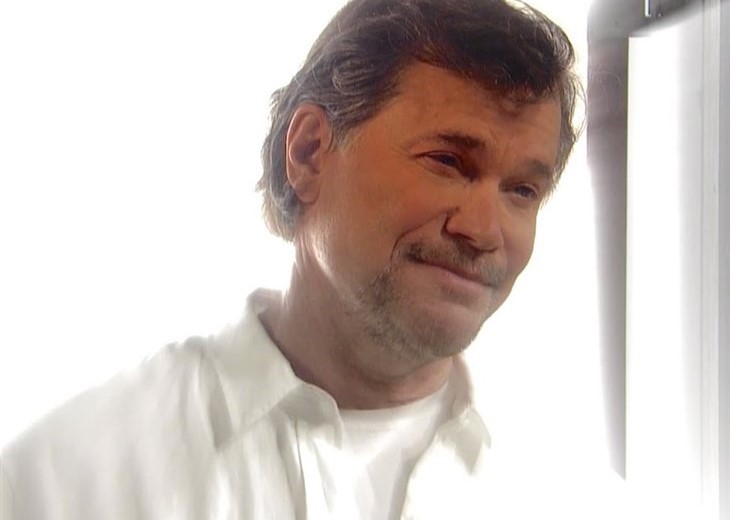 Days of Our Lives Beyond Salem spoilers and updates tease in the Peacock DOOL streaming spinoff Beyond Salem Chapter Two, Angel Bo Brady (Peter Reckell) will be displeased! He will be worried and won’t like what he sees at all when Hope Brady (Kristian Alfonso) wants to marry the mysterious Harris Michaels (Steve Burton) in episodes two and three!

Ben and Ciara Weston (Robert Scott Wilson, Victoria Konefal) and Baby Bo Weston (Cody and Warren Krasnow) arrive via their boat, “Living In Cin” to visit Hope. Although there has been some communication between Ciara and her mother they haven’t seen each other in person in quite some time. Hope is happy to see her new grandson and especially pleased to see he’s named after his grandpa Bo, as she remembers his dying in her arms.

But unbeknownst to Ben and Ciara, Hope has gotten involved with someone she was possibly searching for working with the ISA. She pulls out a file and thoughts of Harris Michaels replace those of dying Bo; but up in heaven, Angel Bo knows Harris isn’t what he appears to be!

DOOL Spoilers – Ciara Weston Asks Where Her Mother Has Been And Who’s The Guy?

Ciara is troubled as she asks her mother where has she been and what has she been up to for the past two years, and who’s the guy? Harris Michaels appears as a decorated military man, a Joe’s Pizza delivery man, a policeman, and a mercenary – who, indeed, IS the guy?! But the mystery man just keeps on being mysterious, and Hope can’t see the forest for the trees as he continues to charm her! He shows up at the door while Ben, Ciara, and Baby Bo are there as the pizza guy – but Ciara and Ben can tell there’s more than pizza involved here. So can Angel Bo looking down from heaven – and as Harris continues to charm Hope, he fumes!

Angel Bo knows this about “the guy” as he calls down to Hope, “Fancy face, where are you” that mystery man Michaels brings danger; he is looking for the prisms! These are the same prisms that his high school girlfriend Megan Hathaway DiMera (Miranda Wilson) sought to cure Stefano DiMera’s (Joseph Mascolo) brain tumor! The prisms can be used for good, and they can be used for bad, and Angel Bo fears they will be used for bad!

Angel Zach Brady (Scott Shilstone) who grew up in heaven stands with his father as they look down at Ciara, the baby, Hope, and the man at the door! Bo was allowed to intervene to save Baby Bo’s soul from Satan, he hopes he can intervene to save Hope from Harris!

Hope isn’t married to Harris just yet, but plans are underway; as Bo attempts to intervene before it’s too late, she tells Ben and Ciara the truth! This man is her fiancé who she has been involved with for the past two years, after meeting him on an ISA mission. All she knows of his past is what is in the file, and that he dated Eve Donovan (most recently Kassie DePaiva) in high school and that she hurt him bad! Ben and Ciara are as concerned as Angel Bo is in heaven that Hope’s fiancé is not what he appears to be; they both sense Hope is in danger! But how can they convince her he’s not what he claims to be with no proof other than what’s in the file?