The Bold And The Beautiful Spoilers: Eric And Donna Celebrate Their Love 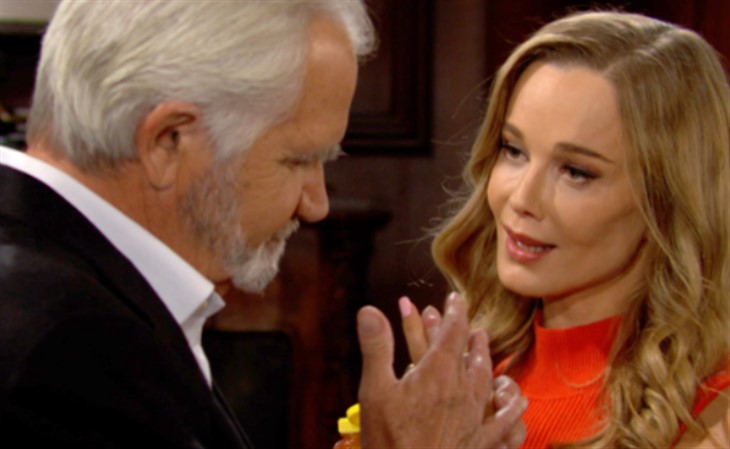 The Bold and the Beautiful (B&B) spoilers and updates tease Donna Logan (Jennifer Gareis) has found her true love. Donna has wanted to be able to reunite with her ex-husband Eric Forrester (John McCook). Donna knew that Eric was devoted to his wife Quinn Forrester (Rena Sofer). Eric and Quinn have had problems with their marriage. Eric has found that he wants to have a future with Donna.

Donna wanted to tell her sister Katie Logan (Heather Tom) that she and Eric are back together. Donna told Katie that she and Eric had been secretly meeting at the club. Eric had told Quinn that he was going to the club to play pickleball. Quinn found out that Eric was with Donna at the club because she had given Eric a ring that monitored his heart rate. Quinn got a distressing reading from the ring while she was at the club with Eric’s daughter Dr. Bridget Forrester (Ashley Jones).

The Bold And The Beautiful Spoilers: Lawrence Saint-Victor Talks What’s Ahead For Carter/Quinn/Paris

Quinn got Bridget to come with her to check on Eric and found him with Donna. Eric asked Donna and Bridget to give him time to deal with Quinn. Eric told Quinn that he wanted to be with Donna. Eric encouraged Quinn to follow her heart. Eric knows that Quinn has wanted to make their marriage work but she fell in love with Carter Walton (Lawrence Saint-Victor). Eric wanted Quinn to be happy and told her to go to Carter. Donna told Katie that Quinn was going to try to stop Carter from marrying Paris Buckingham (Diamond White). Katie was stunned by the story that Donna told her but she was happy that Donna and Eric were back together.

Eric wants to let his family know that he is with Donna. Eric wants to host a party for Donna and invite his family. Eric has missed having Donna at his company Forrester Creations. Quinn had been upset that Eric had found a connection with Donna again. Quinn asked Eric to fire Donna. Eric wants Donna to come back to work at Forrester Creations. Donna will be excited to get her job back. Eric hopes that his family will be happy that he and Donna have found their way back to each other.

The Bold and the Beautiful Eric wants to show Donna that he is committed to her. Eric had hung a portrait of Quinn above his fireplace in his home. Eric may decide that he wants to have a portrait of Donna to hang above the fireplace instead of Quinn. Will Eric make the grand gesture of having a portrait of Donna made to hang on the wall? Donna is happy that she is the one that Eric wanted to be with. Donna has a nickname that she calls Eric which is Honey Bear. Will Donna get to have the sweet life that she wants to have with Eric? Donna and Eric are looking toward a long future together. Will Donna and Eric find a way to hold onto the happiness that they have been able to find again? Be sure to catch up on everything happening with B&B right now. Come back here often for The Bold and the Beautiful spoilers, news, and updates.