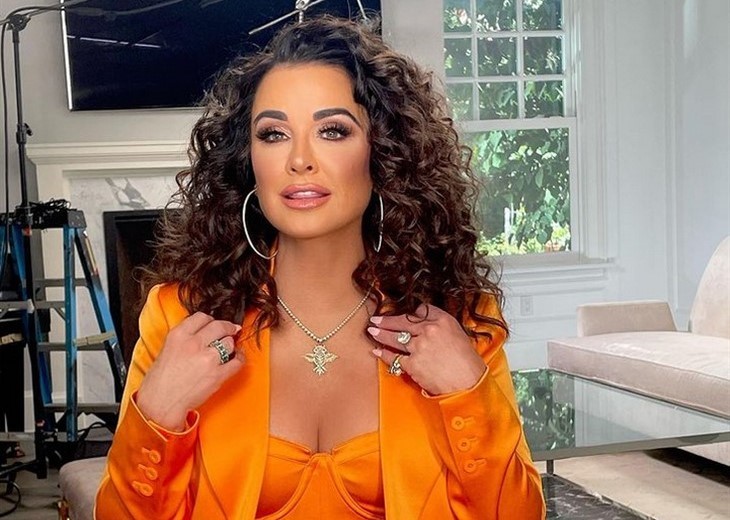 Quick question please, is laughing now a taboo?? I know that most times, given the situation, laughing can be misinterpreted, just like this one is a clear case of misinterpretation but, I think that it doesn’t call for all these troubles.

Here’s what happened, Bravo released a sneak peek of the July 6 episode of Real Housewives of Beverly Hills and the scene featured in it got fans all riled up. The scene shows Erika Jayne, 50, drunkenly cursing at Garcelle Beauvais‘ 14-year-old son Jax at Garcelle’s birthday party, telling him to “get the f–k out” of his mom’s birthday party.

Kyle Richards — On What Caused The Backlash

Dorit Kemsley, 45, was a first-hand witness to the drunken behavior, and though she said Erika’s comments made her “feel sick to her stomach” in a confessional, she could later be seen laughing them off with Kyle, 53.

“It’s not funny, but it is funny,” Kyle says before launching into a confessional of her own, adding, “The Erika that we’ve known all these years was holding a lot in, so seeing this side of her—more open and honest—even if she’s not always showing her best side, at least it’s genuine.”

Now, here’s what fueled fans, it’s not just that Erika is wayy older than Garcelle’s children yet she was hitting on them, although it might be said she was under the influence of alcohol, but, that Kyle and Dorit found it funny, even their husbands, Mauricio and PK. Fans slammed Erika for her behavior at the party and criticized Kyle and Dorit for their response to the incident.

Kyle Richards’ – Response To The Backlash

Some RHOBH fans were upset by their reactions, and when one Bravo fan account posted a clip of the conversation on Instagram, Kyle chimed in to defend herself.

“I was laughing about a friend’s drunken, ridiculous behavior,” Kyle wrote, about Erika. “NOT about disrespecting someone’s child. I think you know me better than that by now. I wasn’t even there to see this and only heard about Erika and what she had said later,” she added.

Kyle also addressed the backlash in an interview with Metro, saying, “I didn’t even see Erika say that, I was told the next day. I was laughing at a friend’s drunken behavior as one does sometimes. Nothing to do with disrespecting anyone’s child especially. I’m a mom of four daughters. I think if I had obviously seen it – because I only saw it actually last night on Instagram, that clip – I would have a different reaction. But when you hear a story like that, you’re like, ‘Oh my God!’ I laugh sometimes at the wrong moments, but it wasn’t about Garcelle and her son, it was about Erika.” Kyle also said that she plans to text Garcelle and apologize.

Garcelle was just as appalled by her co-stars as fans seemed to be. One Twitter user tagged her in the clip of Kyle, Dorit, and their husbands laughing about Erika’s behavior, asking if she knew about the conversation or if she had learned about it when watching the episode.

“Nope, never saw this scene until now,” Garcelle responded on July 4 with an angry emoji.

She also took to Twitter the following day to give all three of her sons a shout-out. “This is an appreciation post for my sons Oliver, Jax, & Jaid,” Garcelle wrote alongside a photo of the trio. “You boys make me so proud… you are loving, kind, and respectful. You show respect to people even when they don’t deserve it. Respect is a reflection of your character, not theirs.”

Be sure to catch up on everything happening with Kyle Richards right now. Come back here often for all the Kyle Richards’ spoilers, news, and updates.