The Young And The Restless Spoilers: Imani Compensates By Focusing On Nate – Amanda Struggling To Cope 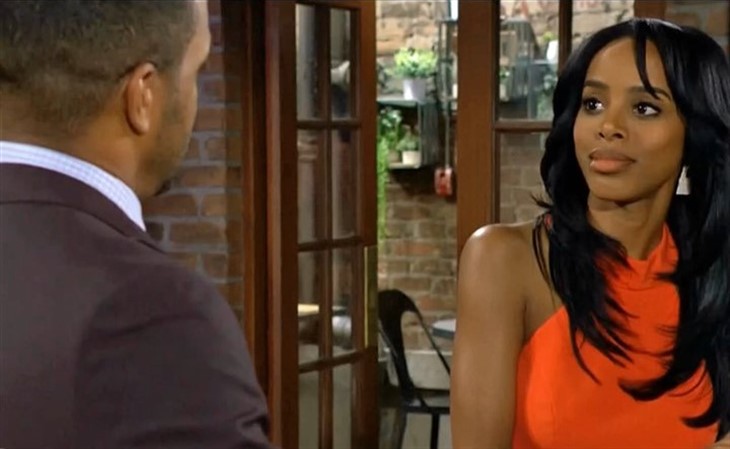 The Young and the Restless (Y&R) spoilers document that Imani Benedict (Leigh-Ann Rose) was attracted to Nate Hastings (Sean Dominic) from the start. However, her recent efforts to advance collegiality into something more have to do with more than the desire for a relationship.

Amanda Sinclair (Mishael Morgan) is not afraid to be open with her feelings. She is worried about her mother, Naya Benedict (Ptosha Storey), who recently suffered a stroke. Morgan’s character has Devon Hamilton (Bryton James), who is in love with her. So, she has someone to confide in and lean on.

The Young And The Restless Spoilers – Building A Backstory In Daytime

Naya was introduced into the story at the end of 2020. She became part of Amanda’s backstory.

Devon’s encouragement proved crucial in helping Amanda to make contact with her birth mother. Naya was honest about giving Amanda and Hilary Hamilton (Morgan) up for adoption while she was in college but initially resisted bonding.

Imani was hostile to Amanda at first. She was used to being Naya’s only known child and felt Amanda falsely claimed to be part of the family. Thankfully, time allowed everyone to bond.

Naya has not been seen for a while, with Rose’s character being written more centrally into Amanda’s life in Genoa City, Wisconsin. The recent news about Naya’s stroke followed dialogue references to her diagnosed heart condition.

Elena Dawson (Brytni Sarpy) tried to make this serious matter a point of common ground with Imani. Yet, Amanda’s sister redirected those conversations toward a discussion about Nate.

Viewers saw that Imani appeared genuine when talking with Nate about her mother. However, it also felt like she was pushing that topic to evoke sympathy.

Amanda is a different character than Hilary. TPTB have skillfully developed Amanda’s family in a way that sets her apart from who Hilary was.

Doing so has allowed Morgan to be Amanda rather than a different version of her initial persona. One of the results of Morgan’s efforts was the historic Daytime Emmy Award for the Outstanding Lead Actress in a Drama Series that she earned last month.

Having grown up not being part of a family was hard for Amanda. However, that circumstance did not harden her. Instead, she built a life that included becoming a lawyer. Devoted viewers recall Amanda’s entrance story line involved Katherine Chancellor’s (Jeanne Cooper) will.

Imani and Amanda are scared of losing their mother. Naya’s children are dealing with uncertainty in different ways. Doing so reflects the nature of the characters Rose and Morgan are portraying.