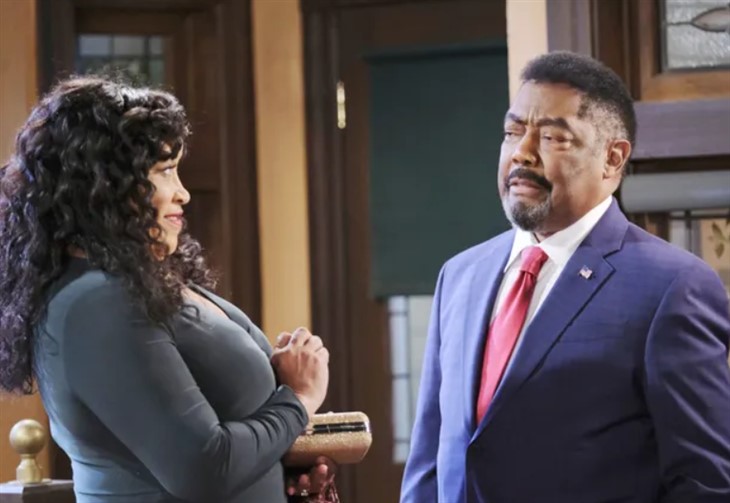 Days of Our Lives spoilers reveal that Abe Carver (James Reynolds) and Paulina Price (Jackee Harry) are happily married now. While they are devastated that Lani Price-Grant (Sal Stowers) must serve time in prison, Abe and Paulina think the worst is behind them. However, couples can only be happy for so long in soaps. So, what is Abe and Paulina’s next story?

DOOL spoilers reveal that Abe unexpectedly found love when he met Paulina. However, their romance got rocky on more than one occasion. When they finally did have their first wedding, then another bombshell secret ruined their happily ever after. At that time, it seemed as if Paulina had destroyed her chances with Abe forever.

Eventually, Abe forgave Paulina and decided to marry her again. The wedding was interrupted once again but they managed to tie the knot this time. Abe wasn’t angry that Paulina lied about TR Coates’ (formerly played by William Christian) shooting. Instead, he saw the power of a mother’s love.

When Lani confessed to killing TR, Eli Grant (Lamon Archey) took her to the police station. Lani’s loved ones were dismayed that Lani would have to go to prison. However, Eli, Rafe Hernandez (Galen Gering), and Justin Kiriakis (Wally Kurth) worked together to try and get Lani a light sentence in a minimum-security prison.

Even though DA Melinda Trask (Tina Huang) was an obstacle, Abe and Paulina took action with the help of Beth Howard (Donielle Artese). Then, there was another bombshell that would hit Lani’s loved ones.

Days of Our Lives spoilers reveal that Vivian Alamain (most often played by Louise Sorel) is still in prison. The villain is currently in solitary confinement but has a hit list. Lani is at the top of that list, which prompted Rafe to put in a transfer request. Lani is supposed to go to prison in Maryland. Eli and the twins will move away from Salem to be close to both the prison as well as Valerie Grant (Vanessa Williams).

Even though Vivian is in solitary confinement, that doesn’t mean she will stay there. Vivian has a way of finding a way out of her predicaments, especially when revenge is ripe. If Vivian escapes, she might not be able to get to Lani. So, could she target Abe and Paulina? After all, Vivian’s minion did kidnap the “Elani” twins.

As fans recall, Vivian was hesitant at first but quickly became attached to her “second chance” of raising twins. So, she could not only target Abe and Paulina, but could become an off-screen threat to Lani, Eli, and the Grant twins.