Days Of Our Lives Spoilers: Wedding Disaster For Lucas And Sami 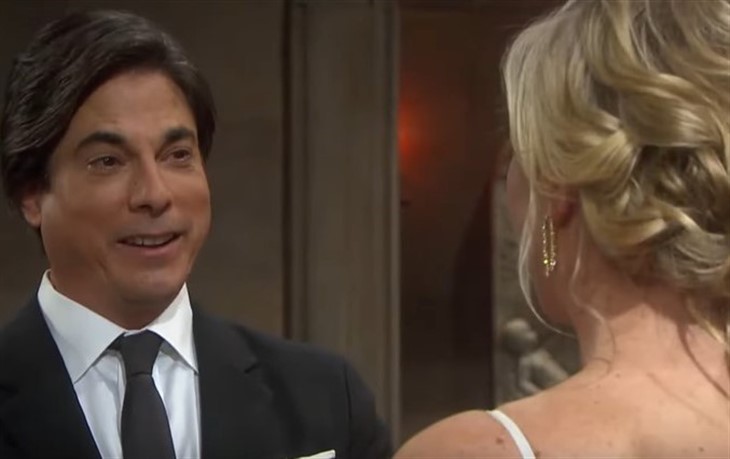 Days Of Our Lives spoilers and updates reveals Sami Brady (Alison Sweeney) and Lucas Horton (Bryan Dattilo) are headed to the altar again on Days of Our Lives but will they actually get married and get to their happily ever after?

Days Of Our Lives Spoilers – Lucas Horton Is Feeling Rushed

Next week on the NBC daytime drama, Lucas is troubled but he’s not giving up on his dream to reunite with and marry Samantha Gene Brady. In fact, it’s like a rush to him but the walls will come crashing down and like with just about every other Salem wedding there is a disaster just waiting to happen as the previously married couple takes another attempt at it.

Lucas and Sami are proud parents of Will Horton (Chandler Massey) and Allie Horton (Lindsay Arnold). They are also parents of other children with other people. Their kids are very excited to see them get married and Lucas will have a confession for his grown son next week on the show. Will he confess to what he did to Sami? That he was the one who actually kidnapped her in the name of love? Or will Lucas’ sins be gracefully exposed at his wedding ceremony?

In the latest promo video for the show, as Sami and Lucas get ready to say their I dos and exchange vows an angry Chad (Billy Flynn) storms in and goes for it with Lucas Horton. Spoilers tease that Kate (Lauren Koslow), Lucas’ mother will have a slip of the tongue while having a conversation with Chad. Does this mean that she disclosed that she told Lucas about Chad revealing to Abigail (Marci Miller) that he was indeed the one to kidnap Sami to back her off the investigation that she was about to take?

Chad storms into the wedding and attacks Lucas in front of everyone at the ceremony including Sami who wants to know what the hell is really going on. Will Lucas’ sins be exposed right therE? Will Sami finally learn the truth about Lucas kidnapping her at her own wedding to her kidnapper? It’s quite possible as spoilers also indicate that the two will not get married as planned and Sami will once again leave Salem.