General Hospital Spoilers: Diane Gets Down To Business To Defend Trina 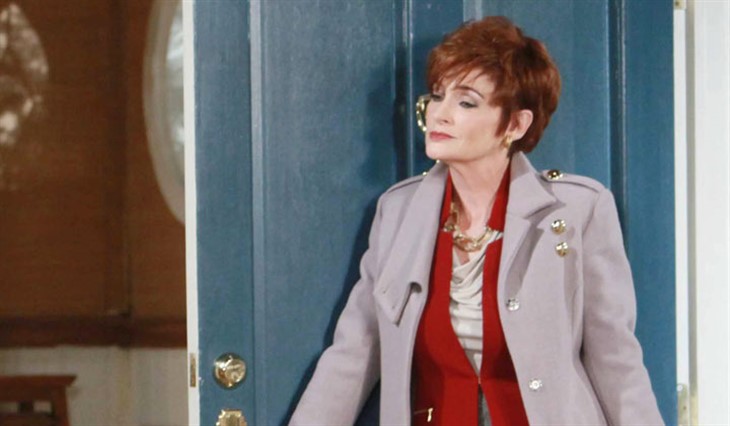 General Hospital (GH) spoilers and updates tease Diane Miller (Carolyn Hennesy) believes in getting results for her clients. Diane has been able to help Michael Corinthos (Chad Duell) and Willow Tait (Katelyn MacMullen) to win their case. Michael and Willow did not want Nina Reeves (Cynthia Watros) to be in their son Wiley Quartermaine-Corinthos’ (Viron Weaver) life. Diane is going to be facing a new challenge when she takes on her new client Trina Robinson (Tabyana Ali).

Diane will find out that Trina has been framed by Esme Prince (Avery Kristen Pohl) for a crime that she did not commit. Esme filmed Josslyn Jacks (Eden McCoy) and Cameron Webber (William Lipton) having sex for the first time and broadcast the footage online. Esme bought an illegal cell phone in order to film the video. Trina and Joss found out that Esme had purchased the cell phone at a bar and went to confront the man that sold Esme the cell phone. Joss and Trina were unable to get the information that they needed to help Trina. Trina has told her mother Dr. Portia Robinson (Brook Kerr), her father Marcus Taggert (Real Andrews), and Portia’s boyfriend Curtis Ashford (Donnell Turner) about the potential lead about the cell phone. Curtis and his father Marshall Ashford (Robert Gossett) are determined to find the man that sold Esme the cell phone.

Diane will want to be certain that Trina is really innocent. Diane may want to find out more about Trina’s whereabouts during the time that the video was broadcast online. Trina has been keeping a secret about Spencer Cassadine (Nicholas Chavez). Trina was with Spencer when Esme broadcast the video. Spencer had been in jail at Spring Ridge. Spencer left Spring Ridge without proper permission to visit his mother Courtney Matthews’ (Alicia Leigh Willis) grave. Trina has wanted to protect Spencer from getting into legal trouble. Trina may be reluctant to tell Diane that she was with Spencer. Trina may turn to Joss for her advice about keeping the secret about Spencer from Diane. Joss may believe that Trina needs to tell Diane that she was with Spencer when the video was broadcast.

General Hospital Comings And Goings: Here’s What You Need To know About Evan Hofer #GH #GeneralHospitalhttps://t.co/ld6hVNkXrY

Spencer may be able to get a confession from Esme. Will Spencer get Esme to confess her crime against Trina? Diane may need to get more evidence to prove that Trina is innocent. Diane may get the evidence that she needs from Curtis and Marshall. Will Curtis and Marshall be able to find the man that sold the cell phone to Esme? Diane may be able to get Trina to tell the truth about being with Spencer when the video was broadcast. Will Diane get Trina to use her alibi to help her to clear her name? Be sure to catch up on everything happening with GH right now. Come back here often for General Hospital spoilers, news, and updates.