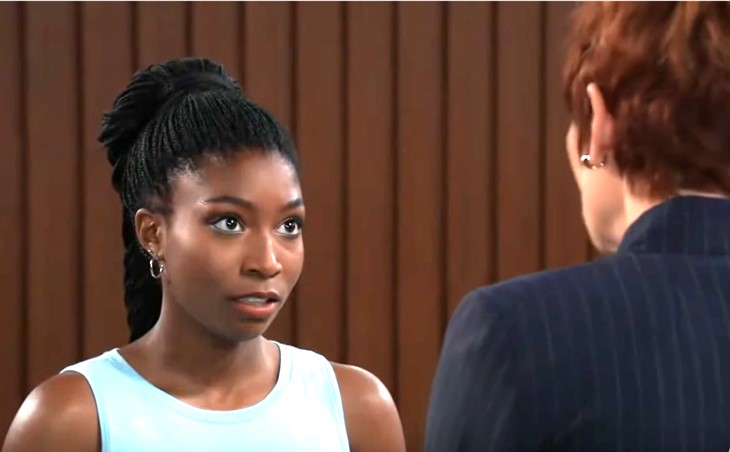 General Hospital spoilers reveal Spencer finally taking the stand at Trina’s trial, but it doesn’t look like he is going to be her savior.

General Hospital Spoilers – Does Diane Miller Have A Trick Up Her Sleeve?

Diane Miller (Carolyn Hennesy) would think she has a slam dunk case if she only knew that Trina Robinson (Tabyana Ali) and Spencer Cassadine (Nicholas Alexander Chavez) were together when Esme Prince (Avery Kristen Pohl) released that sex tape of Josslyn Jacks (Eden McCoy) and Cameron Webber (William Lipton) onto the internet.

However, neither teen wants anyone to know that because Spencer was supposed to be in Spring Ridge at the time and managed a quick breakout to visit his mother’s grave. Josslyn knows the truth, but Trina swore her to secrecy so she kept her mouth shut about it when she got on the witness stand. Too bad she didn’t shut her mouth about anything else, channeling her mother well.

When Diane gets Spencer on the stand, he doesn’t exactly exonerate Trina, but he does leave doubt in the jury’s mind about where Esme was the entire night the tape was made and Diane is pleased.

Trina starts to get more optimistic but then gets ready to take the stand herself and finally tell her story to the jury.

“At this point, Trina has been fighting really hard in multiple ways,” Tabyana Ali said in the August 2, 2022, issue of Soap Opera Digest. “When she gets on the stand, she just wants to tell the truth. She just wants to get it done and have it be over with and I think she is willing to be as vulnerable and as open as she possibly can to show that she wasn’t the one who did this.”

However, Trina never actually makes it to the stand because it turns out Diane has some new information and another witness to call that nobody ever expected. Hopefully, this witness can completely shed light on what really happened while also bringing Esme Prince to justice.

Who wants to bet Selina Wu (Lydia Look) has something to do with this since she is everywhere and all-knowing and has probably been running Port Charles for decades? Stay tuned to General Hospital weekdays to find out what finally happens to Trina.