The Bold And The Beautiful Spoilers: Sheila’s Hideout Is Unsafe – Finn’s Confidence Grows 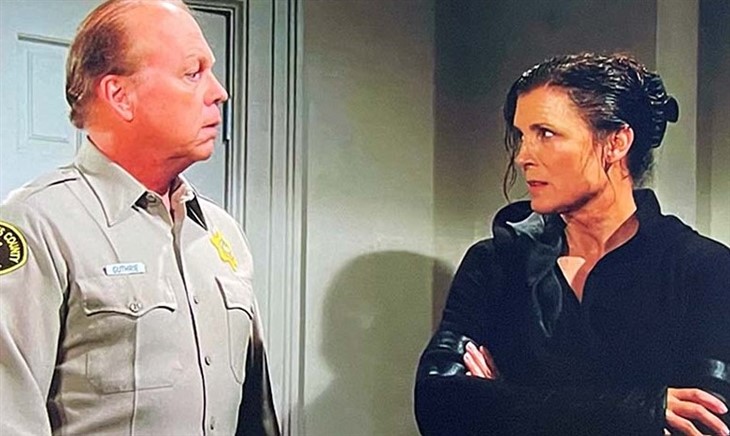 The Bold and the Beautiful spoilers document that Sheila Carter’s (Kimberlin Brown) latest fantasy is collapsing. She acted on whacky impulses, choosing to believe that she and Li Finnegan (Naomi Matsuda) would get along and that the only woman John Finn Finnegan (Tanner Novlan) ever considered to be a mother would not report her to the authorities.

Sheila is used to facing no or limited consequences for heinous, criminal acts. Her latest include shooting her son while attempting to shoot his wife. She left them for dead and continued to interact with the Forrester family, playing the role of a grieving mother.

She followed the above by causing Li’s horrific car crash that viewers just learned was not fatal. Bill Spencer’s (Don Diamont) find of Finn’s adoptive mother and Mike Guthrie’s (Ken Hanes) heated visit to the hideout where Sheila is keeping Finn prisoner is leading to a hot summer finale to this extended arc.

The Bold And The Beautiful Comings And Goings: Vincent Irizarry Returns

While he is not a model employee, Mike should know better than to return to Sheila’s hideout after being grilled by Deputy Chief Bradley Baker (Dan Martin), Ridge Forrester (Thorsten Kaye), and Brooke Logan Forrester (Katherine Kelly Lang).

Sheila’s longtime accomplice had to know that he is the top suspect in aiding her escape from prison. The fact that he would not realize that he would be a target of surveillance, per the Deputy Chief’s call, or that Ridge could put his investigator on him, meaning Justin Barber (Aaron Spears), reaffirms that Mike is not smart.

Sheila is a captive as long as she is caring for Finn because Mike was her lone source of help.

But if he opts out of this forced arrangement, as teasers indicate, then Sheila will be on the clock. As Finn’s strength improves, all Sheila will be able to do is sedate him.

When the sedatives run out, Sheila will have no recourse. She does not appear to be thinking ahead to that breakpoint.

Finn’s eyes are open. He realizes that Steffy Forrester Finnegan (Jacqueline MacInnes Wood) was right about all things Sheila.

But Finn is realistic. While frustrated, he knows that he needs to be patient. Finn is waiting his birth mother to make a mistake.

All Finn needs is one opening, and he can reclaim his freedom and reunite with Steffy. But life in daytime involves the audience being patient while the drama plays out on B&B.