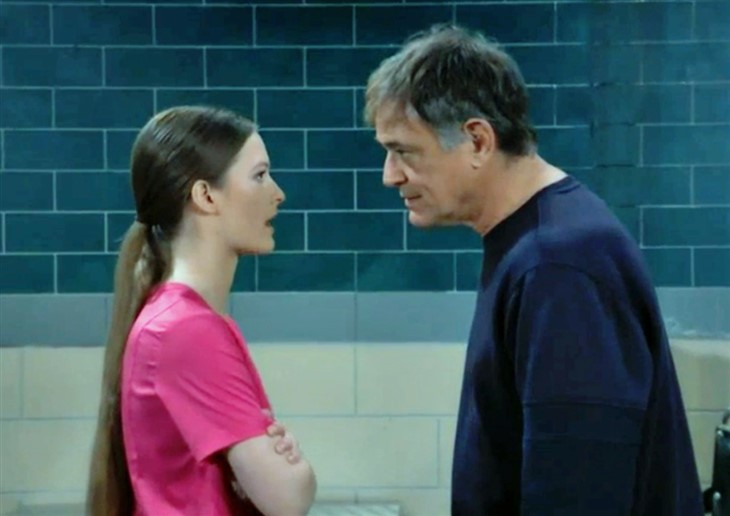 Esmé was hiding but managed to get out the door and into the hallway when the ambulance showed up and police said it was a crime scene. From there, things went from bad to worse; as she was hunting down Nikolas Cassadine (Marcus Coloma) to reinstate her Spring Ridge internship, Oz was coding at GH.

At least Nikolas came through for Esmé and was able to get her Spring Ridge reinstatement to go through so she was able to get to Ryan to ask for help. But she knows that Oz is in a coma, so there’s that; she has to make sure that he doesn’t come out of it. She also needs to ask him about that DNA match between her and her birth mother in Portugal – she’s not just taking Spencer Cassadine’s (Nicholas Chavez) word for it. But she needs a permanent solution to the problem of the comatose Oz, and she wants advice how to get out of it and her leftover fingerprints and DNA. For the first time since she’s been in Port Charles, she doesn’t know what to do.

More than likely, Ryan will scold Esmé for being so sloppy, and he told her to give up those juvenile games months ago. She managed to seduce Nikolas, but not break up his and Ava Cassadine’s (Maura West) marriage? That is simply not acceptable for Ryan but he agrees Oz needs to be silenced for good, and Esmé needs to leave town.

Ryan instructs Esmé to show up at Trina’s trial and expose her and Nikolas’ affair in public – Oz will be out for a while. She needs to blow Nikolas and Ava apart so Ryan can get at her, she’ll be happy to return to his arms after that.

Ryan also says there’s one more thing – Spencer lied; her birth mother has never lived in Portugal but still isn’t forthcoming about who she is or where. Ryan has money in an account from when he worked under his brother’s name and he’ll give her a card and details. He assures her that even he has had to lay low at times and unfortunately she’s not a twin so she can’t go that route. He has a few targets in Port Charles but he wants Esmé away from town before he starts on his own kill list. He still has to pretend he’s locked down just a little longer before he strikes-but she’s not to worry.