The Bold And The Beautiful Spoilers: How Much Can Sheila Withstand? – Finn Stronger By The Day 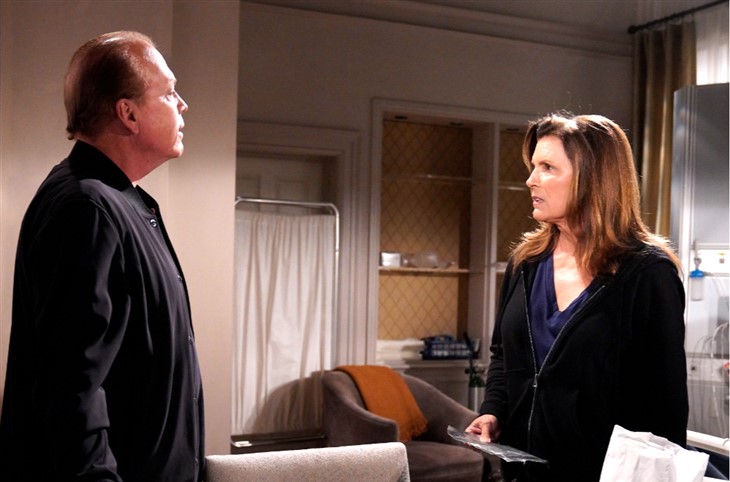 The Bold and the Beautiful spoilers document that Sheila Carter (Kimberlin Brown) is relying on a leading suspect in her escape, Mike Guthrie (Ken Hanes). He is Sheila’s resource for the medication her son needs.

But Mike also offers Sheila needed respite. His ability to indefinitely help the woman he loves seems tenuous since Mike has become a person of interest.

Deputy Chief Bradley Baker (Dan Martin) did not believe Mike when he claimed no knowledge of Sheila’s whereabouts. Brooke Forrester Logan (Katherine Kelly Lang) and Ridge Forrester (Thorsten Kaye), who were allowed to be part of the soapy grilling session, also believe he is lying.

The Bold and the Beautiful Spoilers: Bill An Unlikely Rescuer – Jack and Li Are Done?

Mike was written back into the plot, after not being seen for years, to facilitate three important moments to date. He reappeared when Sheila was scheduled to be transferred to a federal facility, arrived outside of Li Finnegan’s (Naomi Matsuda) residence just as Sheila needed a vehicle, and is providing courier service so Brown’s character can obtain the medicine she needs for Finn.

Would TPTB write Hanes’ side character, who is Sheila’s longtime accomplice, back in if not to have him play an ongoing role in this thriller story line? This assumption implies that he will remain part of the tale whether or not he wants to do so.

Tailing Mike is the most logical step the authorities in Los Angeles, California, can take. That alone should lead them to Sheila.

Sheila has often been on the run throughout the entirety of her runs on B&B and The Young and the Restless. She has to know that remaining stationary would not be wise.

But moving Finn is problematic. To do so, she would need him to be heavily sedated and then hope the risk does not prove damaging or deadly to her son’s still-fragile state.

The longer Sheila remains where Li was caring for Finn and the increased likelihood of Mike cutting ties with her, due to the pressure he is facing, improves Sheila’s chances of being captured.

Finn has learned a lot since he has been able to regain his senses. He prodded Sheila until she told him what happened after the shooting at Il Giardino. But she did not divulge also shooting Steffy Forrester Finnegan (Jacqueline MacInnes Wood).

Telling Finn about Li’s perceived demise was risky. But Sheila was backed into a deceiver’s corner and attempted to cast Matsuda’s character as the victim of circumstance. Finn bought none of Sheila’s bald-faced lies.

Steffy needs to know that Finn is alive. He is determined to win his freedom and reunite with his love. But Sheila’s strength is otherworldly, and viewers know that more drama is ahead this summer before all is resolved.