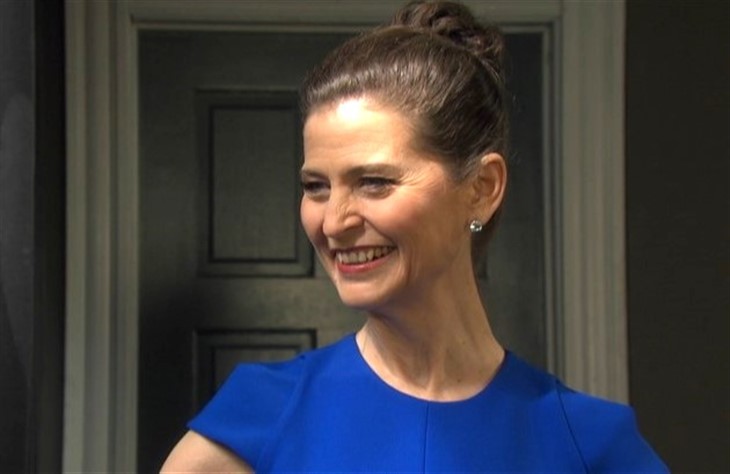 Days of Our Lives spoilers reveal some of our all-time favorite spoilers out there beyond Salem trying to solve some more prism mysteries. Hope Brady knows Megan Hathaway has those prisms and may even know what she wanted them for.

When Megan Hathaway was first introduced to the Salem scene in 1984, she was Bo Brady’s old high school girlfriend who claimed she had given birth to his son and given him up for adoption. That turned out to be a lie and Megan turned out not to be the daughter of wealthy Maxwell Hathaway. Instead, she was just one more — and one of the first — of Stefano DiMera’s (Joseph Mascolo) many long-lost children.

Either way, Megan wanted Hope (Kristian Alfonso) out of the way and rigged for her to be electrocuted in a hot tub at The Body Connection. But before Hope could arrive, Megan and Larry Welch (Andrew Massett) fought and he pushed Megan into the tub. It seemed she had died and stayed dead…until two weeks ago.

Nobody could be more thrilled with Megan’s resurrection than actress Miranda Wilson, who went by the name Cheryl Ann Wilson when she first appeared on DAYS. When she first landed her Salem role, she relished every second of it and didn’t even realize how much terror her character was causing.

“The fact that I was causing trouble between Bo and Hope mattered not one stitch to me because I saw it as Megan was getting back together with her long-lost love,” Wilson said in the August 2, 2022, issue of Soap Opera Digest. “So, Hope was irrelevant to me in the beginning. It was only after it became apparent that was not going to happen and Megan’s obsession with getting rid of Hope took over that it started feeling a bit creepy.”

The fact that Megan is STILL obsessed with having Bo Brady (Peter Reckell) as her one and only 40 years later is even creepier. She has even been keeping him cryogenically frozen for seven years just so she can be the one to resurrect him. The results of that will probably be the focus of Beyond Salem 3. Look for another installment next year to see what Megan Hathaway does next.