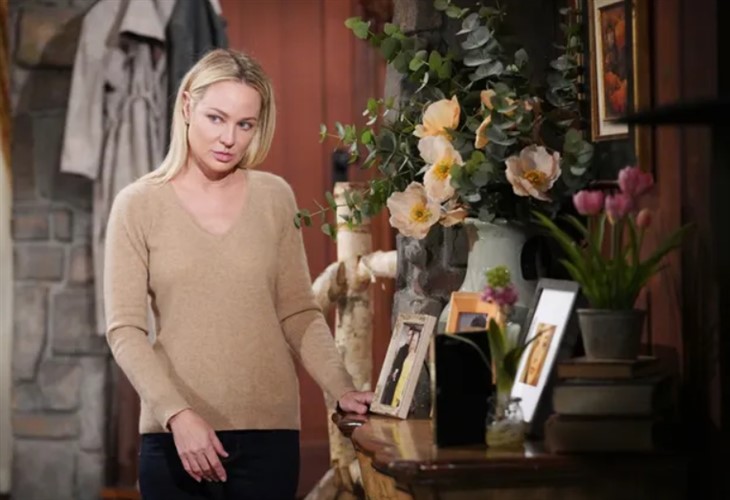 The Young and the Restless spoilers document that Sharon Rosales (Sharon Case) found herself in an awkward position at Crimson Lights. The owner of this popular establishment has often served as Genoa City, Wisconsin’s facilitator.

It is natural that someone who serves many of this town’s famous residents would be asked for advice, become part of various conversations, and be drawn into conflicts. So, it is natural that two people who just broke up would include Sharon in their story line.

But having Adam Newman (Mark Grossman) and Sally Spectra (Courtney Hope) discuss details of their now-ended relationship was soapy and potentially game-changing.

The Young And The Restless Spoilers – Sam Malone In Genoa City?

The 1980s and early 1990s sitcom was the place where everyone knew frequent customer Norm Peterson’s (George Wendt) name. Everyone knows Adam’s name in GC, with Grossman’s character projecting the same sardonic wit as Wendt’s character. Sharon is the Sam character at Crimson Lights on Y&R.

Cheers included elements of a serialized story line, making it comparable to a soap opera. Initially, Diane Chambers (Shelley Long) was the woman Sam pursued. Long left the cast a handful of seasons into the show’s run to pursue other entertainment dreams, with Rebecca Howe (Kirstie Alley) replacing Diane and becoming Sam’s often-times object of affection.

Diane briefly returned to Cheers during its final season in 1993. Rebecca, similar to Sally, never eclipsed Diane in Sam’s heart. But Sam and Diane did not have a fairy tale ending, and neither did Sam and Rebecca.

After all these years and two actors after Michael Muhney (Adam), the character Grossman plays still finds himself drawn to Sharon when he is unsettled.

Sharon is Adam’s deepest love. For various soapy reasons, this one-time married couple has never reunited. However, devoted fans know they did have a one-time cavort a few years ago when both characters were briefly single.

Sharon’s tell to Adam, while Sally was eavesdropping, proved significant. Sharon told Adam that Sally seems to genuinely care about him.

The Young and the Restless Star Courtney Hope Opens Up On What She Really Thinks About Sally Spectra #YR #YoungandRestlesshttps://t.co/jNje6D1nHx

Adam’s admission, that he set her free, was followed by a forced denial when Sally questioned him moments later in front of Sharon. Sally’s subsequent sit-down with Sharon was important because Hope’s character again sought guidance from Adam’s ex.

Sharon’s unfortunate single status as Rey Rosales’ (Jordi Vilasuso) widow winks at an eventual romantic connection with someone in GC. But Sally should wonder if Sharon and Adam will seek a reboot if he refuses to reconcile?