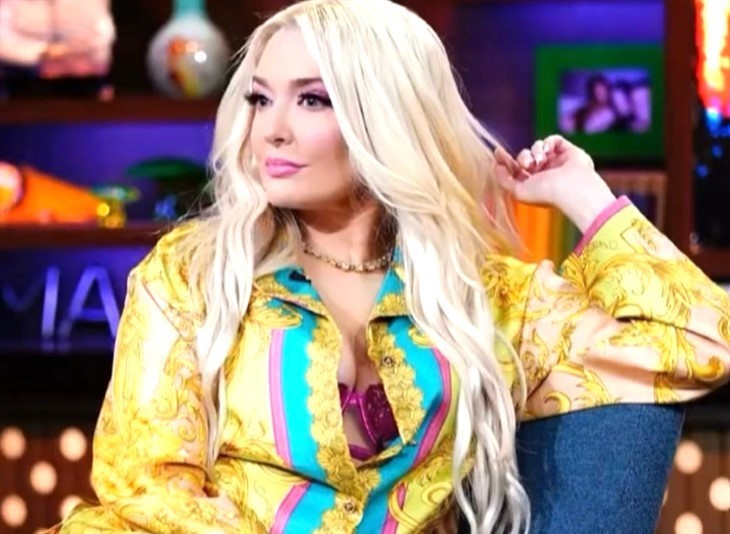 Real Housewives of Beverly Hills, (RHOBH) fans saw some appalling behavior by Erika Jayne and they roasted her for it. Although she claims many other folks make similar mistakes, Bravo fans are not buying it.

Probably, you already know the Season 12 spoilers that revealed her acting very drunk and getting aggressive with Garcelle’s teenage son, Jax. With the news arriving this week, that she was served some lawsuit papers, interest in her behavior revives somewhat.

Additionally, a recent episode ended up with Kyle Richards getting slammed for thinking the drunken scene was hilarious. After all, Erika clearly hit on Garcelle’s other son, Oliver.

RHOBH fans have looked for cracks in Erika Jayne’s story that she didn’t have any part in Tom Girardi’s business. Recall he was accused of defrauding the families of the 2018 plane crash. Actually, there are a few holes that can be poked in other stories about Erika Jayne and Tom.

Remember when she claimed that Tom’s trauma from a car accident in 2017 made him do things that he wouldn’t normally do? Well back in time, she actually said that the accident was just a minor one, with no traumatic injuries. So, it’s easy to doubt her word about fraud and her mixing anti-depressants with alcohol.

Redditors no longer believe anything that comes out of the mouth of the reality TV star. They think she lied about not knowing what Tom was up to. Plus, they believe she acted out of expediency by trying to distance herself from him.

In fact, many Bravo fans disbelieve they had a satisfying relationship in bed. So, that makes people think that she used the old guy for his money. Furthermore, they think she exaggerated the accident. Now, they think she tells fibs about mixing anti-depressants with alcohol on just one occasion.

When RHOBH fan u/SpecialRaeBae raised the subject on the r/realhousewives subreddit, many people expressed their anger with Erika. Screenrant noted that It came ahead of the cast expressing their concerns in the current show.

RHOBH fans know that mixing alcohol with medication is not a great idea. So, one person opined, “She announces to everyone she’s on antidepressants and then proceeds to drink the entire episode. She is hideously irresponsible.”

Another follower noted the difference between drugs for anxiety and drugs for depression. They said, “Xanax, ativan, valium, and klonopin are benzos which you’re supposed to take for anxiety,”

Meanwhile, “antidepressants are used to regulate your brain chemistry. Never once while on Lexapro or any other antidepressants did I become intoxicated. Benzos on the other hand, were a whole other story.” So, they think that Erika Jayne is obviously taking the stronger tablets.

The critic ended by suggesting, “Erika’s strung out on benzos, but I don’t know why she’s lying about it if she gives zero f–ks?”

What do you think? Sound off in the comments below.

Be sure to catch up on everything happening with RHOBH. Come back here often for more Real Housewives of Beverly Hills spoilers, news, and updates.