The Bold And The Beautiful Spoilers: Li Instantly Better – Sheila Persuaded By Finn 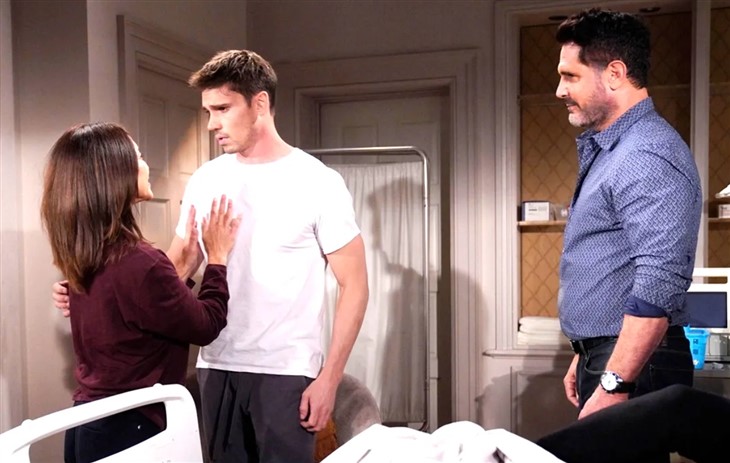 The Bold and the Beautiful spoilers document that Li Finnegan (Naomi Matsuda) was in a deep emotional fog. As Bill Spencer (Don Diamont) and Liam Spencer (Scott Clifton) recognized, she endured a massive trauma. But then, as soaps go, Li became instantaneously better on B&B.

It was remarkable how Liam’s identification of Li helped her to snap out of the mental haze she was enduring. Her subsequent explanation of what happened after John Finn Finnegan (Tanner Novlan) arrived at the hospital, to when Sheila Carter (Kimberlin Brown) stopped at the still unexplained sports utility vehicle survival.

But the plot advanced within one set of scenes, as Bill arrived at the building Li recognized. Matsuda’s character followed, with fans witnessing the penultimate reunion that Finn will have.

The Bold And The Beautiful Spoilers – How Did Li Finnegan Survive?

Yes, this is purely a curiosity question and one that is not nearly as important as rescuing Finn and bringing Sheila to justice. Plus, Finn needs to make contact with Steffy Forrester Finnegan (Jacqueline MacInnes Wood).

However, Li’s unfathomable existence is as incredible as her adoptive son’s. She somehow managed to withstand the impact of her SUV hitting the water.

Li must have escaped on her own because a Good Samaritan would have ensured she received follow-up care. That seems to be the likely explanation because the crash went unreported.

Li and the audience still do not know how Sheila located her. But when she did, it only took a matter of moments to hear noise in an inner room.

Sheila wanted Li to tell her Finn’s burial site. She was shocked when opening a door and finding her beloved son in a hospital bed.

It was a solid bit of soap to have Finn shocked to see Li arrive moments after Bill because he assumed she was dead.

The Bold And The Beautiful Spoilers – Sheila Carter Lives To Tell

Sheila appeared willing to go back to jail if she could be certain Finn would remain in contact with her. He had no intentions of doing so and bluntly stated that she would never know Hayes Forrester Finnegan (Samantha Worden and Piper Harriet).

Finn’s refusal to budge broke Sheila’s heart. And yes, even B&B’s incomparable villain has some good in her. She is incapable of maintaining control and that is why her pattern of destruction repeats. Yet, as Sheila wondered aloud to Finn, just prior to Bill and Li’s arrival, she can not determine why drama pervades her life.

Brown is such an outstanding actor and has been for more than three decades in daytime. She is delivering yet another Emmy-worthy performance, with Sheila provoking emotion from all who love the soaps.