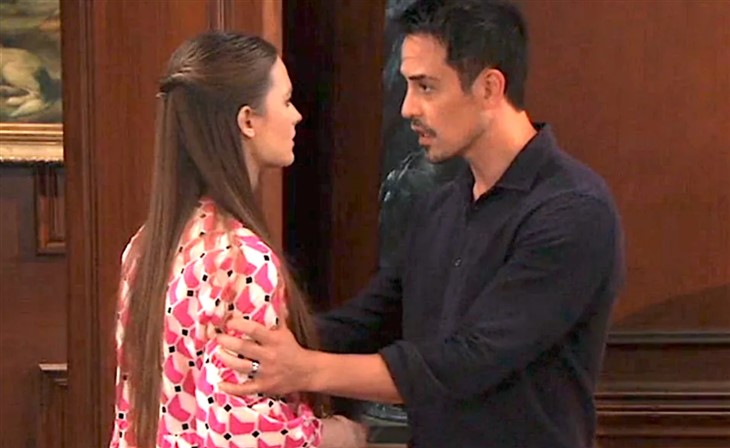 General Hospital spoilers reveal that Nikolas Cassadine (Marcus Coloma) could lose his family over Esme Prince’s (Avery Kristen Pohl) reveal. Will Nikolas be abandoned by his wife and son? Does Nikolas deserve a second chance?

General Hospital spoilers indicate that Nik will have to face the wrath of Ava Jerome (Maura West) and his son Spencer Cassadine (Nikolas Chavez) as well. Nikolas slept with the woman who stalked his wife and used her dead daughter to torture her. How can Ava be expected to forgive this betrayal?

Esme is Spencer’s girlfriend, for all intense purposes. Esme has tried to ruin Trina Robinson’s (Tabyana Ali), who Ava is very close to, life as well. Nikolas has taken Esme’s side over Ava time and again. Now Nikolas has slept with Esme on top of everything else. Ava is well within her right to despise Esme but how could she forgive her husband for his betrayal with Esme?

GH Spoilers – A Divorce Is Imminent

General Hospital spoilers suggest that Nikolas will get his divorce after all. However, Ava is not going to be divorcing Nikolas to start over, Ava will be done with him after this indiscretion is out. Nikolas has no one but himself to blame for his family being blown to bits. How could Nikolas allow Esme to manipulate him this way?

Esme is by far the worst person Nikolas could have betrayed Ava with. Nikolas is responsible for any discord that he felt in his marriage. How does Nikolas expect to be forgiven for his lies and deceit? Was protecting Esme worth what it has now cost Nikolas?

GH spoilers reveal that Spencer is done with Nikolas as well. After all, Spencer had already disowned his father before giving him another chance. Instead of taking the chance to repair his relationship with his son, Nikolas has blown it by sleeping with Esme.

Spencer is likely to be completely disgusted with this father and no one could blame him. Is Nikolas about to find himself without Ava or Spencer? Does Nikolas deserve to be alone after betraying his wife and son? Nikolas should have never allowed Esme in his home after she betrayed Ava. However, Nikolas felt the need to protect Esme from Sonny. Will Nikolas forgive himself for destroying his family?

Now that Ava is about to target Esme, will she disappear for good or will Esme fake a pregnancy to hang around town? Will Nikolas ever earn his family’s forgiveness again?