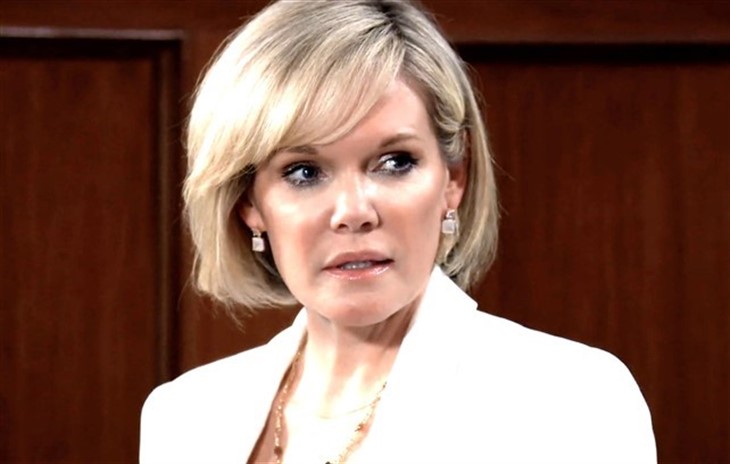 General Hospital spoilers tease that after months of build-up, Ava Jerome (Maura West) and Esme Prince (Avery Kristen Pohl) finally had it out, possibly once and for all. After Nikolas Cassadine (Marcus Coloma) finally confessed that he slept with Esme, Ava wasted no time in chasing Esme down at Wyndemere, right before Esme was finally about to skip town.

But Esme didn’t back down and gave as good as she got, making sure that Ava knew that she knew more about Ava than Ava knew. This led Ava to believe that Esme’s attacks on her were personal, although Esme tried to deny it.

Although Ava certainly wants to make sure Esme pays for sleeping with her husband, her first priority at the moment is to get Esme to admit she framed Trina Robinson (Tabyana Ali) for recording and posting Josslyn Jacks (Eden McCoy) and Cameron Webber (William Lipton) having sex. But Esme wasn’t having it and wasn’t about to change her plans to skip town. But Ava wanted to make sure that Esme knew there wasn’t an option.

Ava made it clear that if Esme didn’t help Trina, she wouldn’t be going anywhere. Ever. Ava told Esme that she would kill her if she didn’t help Trina. After everything that Esme has done to frame Trina, it’s doubtful that she will go down without a fight. There is every possibility that one of them won’t be leaving Wyndemere alive. But Ava may not have the advantage she thinks she does. Esme is the daughter of serial killer Ryan Chamberlain (Jon Lindstrom) and is likely more vicious than Ava counted on.

General Hospital Spoilers – Down The Turret She Goes!

Many people have been thrown off the turret at Wyndemere, including Ava herself who was saved by Nikolas. She will have no intention of tempting fate a second time. But that doesn’t mean that Ava won’t push Esme to her possible death if it comes down to it. It’s going to be a battle to remember and there is no telling who will emerge victorious!

Will Ava convince Esme to exonerate Trina? Or will Esme find her very life in danger? Could either Esme or Ava find themselves falling from the heights of Wyndemere? Anything can happen in Port Charles so stay tuned to General Hospital airing weekdays on ABC. And don’t forget to check back right here regularly for all your General Hospital news, information, and spoilers!